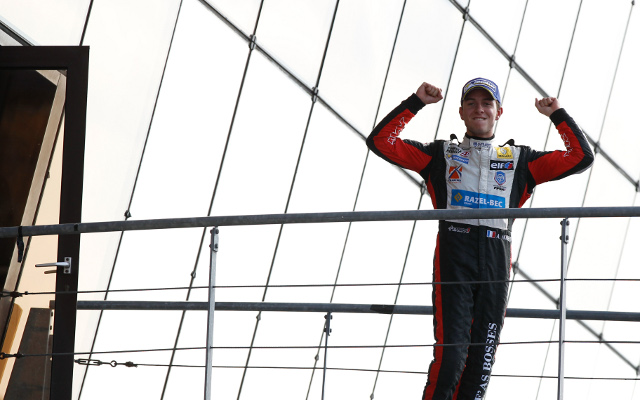 Anthoine Hubert beat team-mate Simon Gachet to win the second Eurocup Formula Renault 2.0 race of the weekend at Le Mans, closing to within 13 points of the championship lead with a round to go.

Hubert led away from pole but ended up behind Gachet after the Dunlop chicane, after his team-mate cut the corner.

The race was then neutralised behind the safety car after Matevos Isaakyan ended up in the gravel.

After the restart, Hubert got a run on Gachet along the main straight and was able to re-pass down the inside at Dunlop, with Gachet not defending the move.

As he took his second win of the season, Hubert was able to pull out a margin of nearly two seconds as Gachet defended from Dennis Olsen.

Gachet stayed ahead – after cutting the DuInlop chicane once more – as he claimed his first podium in the Eurocup, while Olsen got his first rostrum since winning at the Aragon opener.

Gachet and Olsen appeared on the podium with their positions switched – Olsen second and Gachet third.

Ignazio D’Agosto finished on the tail of his Manor MP team-mate Olsen in third, while Harrison Scott kept fellow Britons Ben Barnicoat and Jack Aitken at bay for fourth.

Aitken did finish ahead of title rivals Kevin Jorg and Louis Deletraz, who started fourth and fifth but fell back to eighth and ninth on the opening lap and stayed there until the end, Deletraz fending off Ukyo Sasahara.

The two Swiss Josef Kaufmann Racing drivers are now tied on points at the head of the standings, going to the final round at Jerez.

Aitken is just seven behind and only six ahead of Hubert, who is up to fourth ahead of Barnicoat and Hughes, who finished down in 15th.

UPDATE: It was later confirmed that stewards had indeed dropped Gachet behind Olsen in the results. Furthermore, Scott was relegated five-places for gaining an advantage by going off the circuit, putting him 10th. With Aitken, Jorg and Deletraz among those promoted a place, Hubert’s standings deficit to each of them is increased by two points, leaving him 15 off the lead.