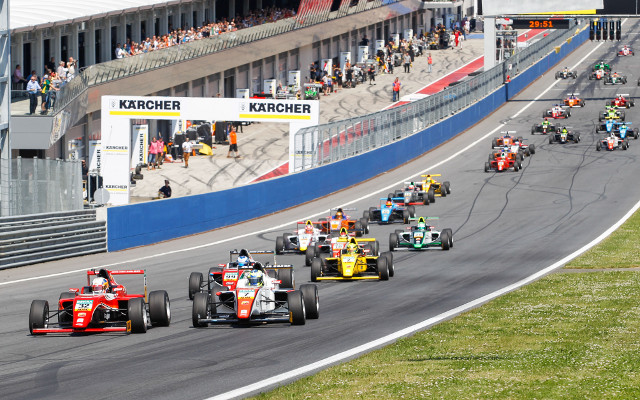 For the second week in a row, crash-strewn junior races are the big talking point of the week, this time in ADAC F4. Valentin Khorounzhiy gives his thoughts on the situation.

?This should not and will not happen again,? Lechner Racing protege Florian Janits said after hitting Job van Uitert at turn one in ADAC F4’s final Spielberg race. It wasn’t the very capable Austrian’s finest move, but his incident was far from the most egregious this weekend.

Indeed, it’s not been a great couple of weeks for FIA’s junior ladder as the well-publicised disaster of a European F3 round at Monza has now been followed up with an ADAC F4 outing that was less of a trainwreck, but just enough to generate some pretty woeful headlines for the series.

While Saturday’s only race produced two relatively tame incidents, all hell broke loose on Sunday. First, Thomas Preining hit Mick Schumacher on the main straight, resulting in a broken hand for the series’ most popular driver. But that was followed up by an even worse crash in the opening lap of the final race ? Mattia Drudi rejoined the track at high speed, spun himself over Ralf Aron and triggered a very nasty pileup.

Several cars were out for the day, but rising Ferrari star Guan Yu Zhou had the worst of it, losing almost half his car in a high-speed roll. It was honestly a surprise to even see the race restarted ? and, conversely, quite unsurprising to see it canned early after two more crashes.

Crashes happen in racing, of course. But that’s now two weeks in a row that a junior championship has been called short of the checkered flag amidst carnage. It definitely makes sense to wonder what exactly is at play here.

Let’s get the really obvious one out of the way from the get go ? the thing European F3 and ADAC F4 have in common is that they’re ludicrously popular, with grid sizes unrivaled by other professional international single-seater championships.

ADAC F4 is so in demand it actually has non-qualifiers, which does seem rather harsh on young racers who got their sponsorship together to be there. But even with DNQs, the grid size at Spielberg was at 37 cars.

Even disregarding skill and experience levels and other variables like that, simple maths will tell you this bumps the probability of incidents up quite a notch compared to your usual 20-car grid. More incidents mean more safety cars, more safety cars mean the field getting bunched up all over again – ‘cautions breeding cautions’, if you like. Some will tell you that means less safety cars need to be called out, but I won’t be one of them. 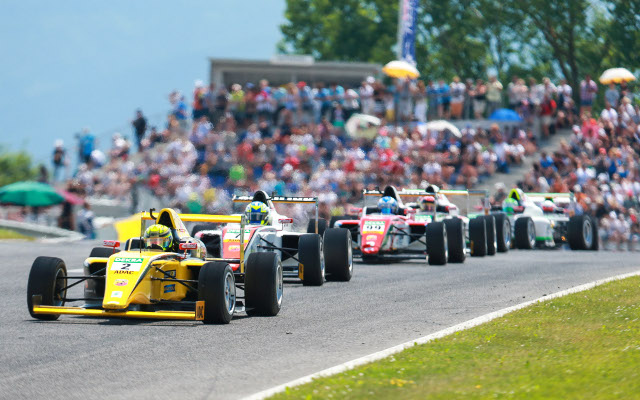 In addition, just as European F3, ADAC F4 boasts a very, very strong this year, possibly as strong as it gets in entry-level championships. At Spielberg, that meant that 26 cars qualified within a second of the top times in their respective groups. That’s not exactly a field that’s going to spread out as the race goes on.

And that might be part of the problem in a different sense. Some overtaking attempts at Spielberg seemed downright desperate, as did some defensive moves and that’s hardly surprising. For many of these drivers, this season is make-or-break and they’ve been thrust into a grid that has about 20 names just as quick as them. Most of them won’t get many chances to score a top result ? and Spielberg, due to its overtake-heavy nature, represents one of the better opportunities to fight through to a finish that can secure your future.

The biggest hit of the weekend took place right after Drudi rejoined from the runoff at the first corner and spun himself over Aron. Monza’s Parabolica runoff was heftily blamed for a good chunk of last weekend’s carnage, albeit, as someone who saw Sun Zheng dip into the gravel that used to be there and get collected by a flat-out Matevos Isaakyan last year in FR2.0 Alps, I implore people not to oversimplify the issue.

The current situation at Turn 1, however, clearly needs some work because the runoff means that the available track narrows dramatically in a very short distance, almost asking for an incident like this.

Drudi, of course, should’ve eased off the throttle. But it’s not hard to see why he didn’t ? it’s a split-second decision between either doing something other drivers have gotten away with all weekend and keeping a good spot, or losing momentum and dropping well out of the top ten. He’s a title contender so, for him, the difference between finishing, say, 11th, 35th or retiring altogether is virtually non-existent ? all are non-scores.

It is also worth noting this particular misjudgment was made by one of the series’ finest ? a driver who last year did the first-ever hat-trick of wins in an FIA F4 series. Not that the rest of those who caused trouble don’t deserve to be here ? Preining’s a Rotax karting star, Janits is a race winner in Renault 1.6, Robert Shwartzman, whose failed overtake on David Beckmann eventually led to the red flag, is one of Russia’s biggest prospects. Even Schumacher himself caused a crash on Saturday and there won’t be many who argue he doesn’t belong on the grid.

It’s arguable, of course, but for my money, the issue is not the drivers, nor is it a lack of some nebulous notion of ‘respect’ or, even worse, ‘fear’. It’s just a direct result of putting a number of inexperienced racers in the competition of their lives. 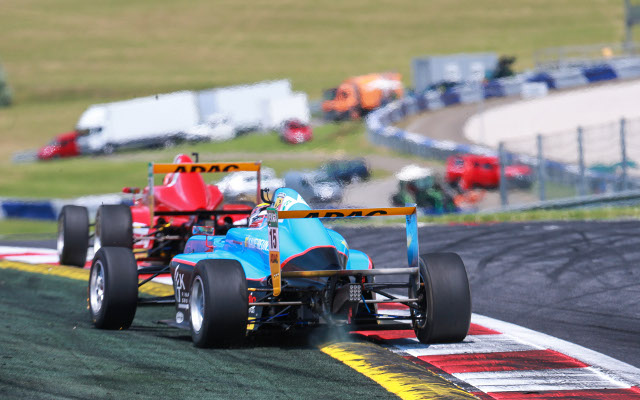 So, how can this whole situation be solved? Well, there’s not much the FIA can do this year, sporting regulations being set in stone and all, except maybe be stricter in enforcing penalties for undesirable on-track behaviour ? a fine goal, though probably not the instant solution to every problem some might think it is.

Personally, should ADAC F4 aim for a similar grid size next year, I would heartily welcome a huge rethink of the points system for 2016. When there’s more than two dozen drivers within one second of the leader, only handing points to nine of them is not only unfair, but also conducive for unreasonable risk-taking in the lower reaches of the pack.

But, at the end of the day, filling the grid with 40 people straight out of karting is just not very safe or particularly educational ? it is unlikely they will have to face such numbers anywhere else further along in their single-seater careers.

The entry list should be capped, as bad for business as that sounds. And if demand remains this high, there should be an alternative supply. The most recent competitor to what was then ADAC Formel Masters in this region was Formula Renault 1.6 NEC, which would’ve certainly helped the new F4 series manage grid numbers if it didn’t go under. But it did and something is needed to fill that void instead.

The solutions, however, all mostly seem long-term. With entries paid and budgets settled, it’s not easy to imagine what the FIA and ADAC could do right now to prevent a repeat of this further down the calendar. But one thing’s for sure – crossing fingers and closing eyes is not an option. Especially not when the next track ADAC F4 will be visiting is Spa-Francorchamps.

Jake Hughes?and Matevos Isaakyan?win the two respective races to close in on championship leader Jack Aitken and, with eight races to go, the title will almost certainly be decided among the trio. Isaakyan’s teammate Thiago Vivacqua helps him out by taking points out of the Koiranen duo with two podiums. 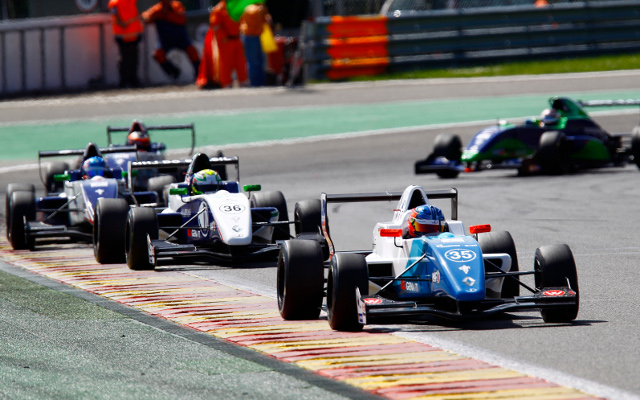 Josef Kaufmann Racing duo Kevin Jorg and Louis Deletraz run the show, locking out the top two in each of the three races by a considerable margin. Jorg wins the first two, but Deletraz gets the last laugh and now enjoys a sizeable lead in the points. Behind them, Jehan Daruvala, Alex Gill and Nikita Mazepin all take their first podium finishes.

Yu Kanamaru?enters title picture as the round’s top scorer, winning the first race and finishing runner-up to points leader Konstantin Tereshchenko in the second. Two podiums for Vitor Baptista keep him in the hunt, while Alessio Rovera returns to form with a third place on Saturday.

Joel Eriksson wins twice to take the points lead, even if a race three pileup stops him from adding to the tally. The shortened finale is won by Joseph Mawson. Oschersleben stars Marvin Dienst and Ralf Aron have tough weekends, but both make podium appearances.

Finns Aleksanteri Huovinen and Niko Kari star, making the podium in all three races and grabbing a win each. Aleksey Korneev bounces back after stalling from pole in race one to win race three, while Vladimir Atoev and Nikita Sitnikov also claim home-soil podiums. 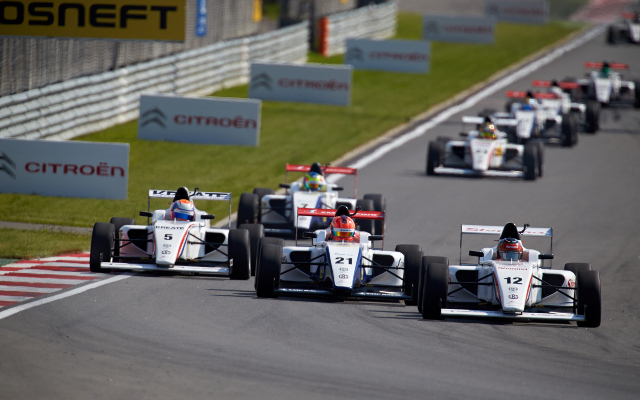 Despite a DNS in race one, former Ginetta Junior racer Pedro Cardoso vaults to the top of the standings by winning race two. Race one, meanwhile, is won by 2014 returnee Francisco Camarotta. Agustin Lima, who led after El Pinar, skips the round to race in Formula Renault Argentina.