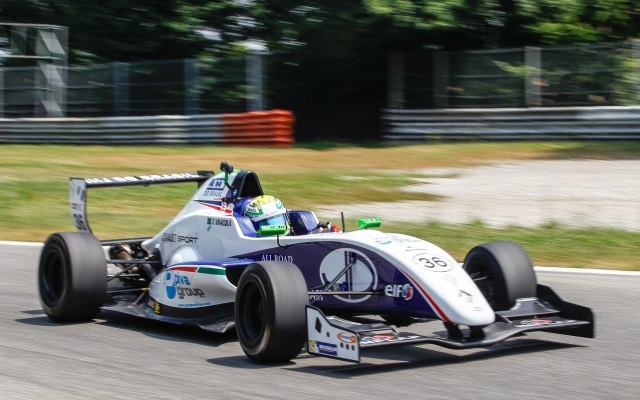 After three podium finishes in the past four races, Thiago Vivacqua scored his first single-seater victory in Formula Renault 2.0 Alps at Monza.

The Brazilian started from third but got ahead of teammate Matevos Isaakyan off the line and shadowed?leader Vasily Romanov afterwards.

Things went from bad to worse for Isaakyan as his slow getaway was followed by contact with Ferdinand Habsburg at the first chicane, which dropped the Russian to last place.

Another championship contender Jack Aitken was also involved in the incident as he was forced onto the gravel and lost a lot of positions.

At the front, Vivacqua didn’t?let?Romanov build a safe gap during?the first half of the race and eventually managed to make a move for the lead.

He cruised to the finish afterwards, while Matteo Ferrer, who snuck past Romanov as well, celebrated his first podium of the season in second.

The poleman ended up third, followed by top Koiranen driver Stefan Riener, who had to fend off Denis Bulatov?during?the final lap.

Both of them finished just ahead of first lap victims Jack Aitken and Matevos Isaakyan who recovered to seventh and ninth respectively, while Philip Hamprecht rounded the top ten out.

Title contender Jake Hughes was running fourth for the majority of the race, but dropped out of contention with a mechanical issue on the final lap.