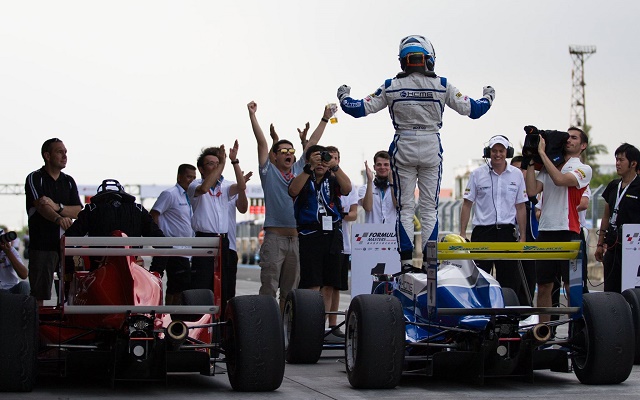 Championship leader Martin Rump held off closest rival Jake Parsons to win the first race of the third Formula Masters China round at Penbay from pole.

The race started on a damp but fast-drying track, and the safety car was called out immediately after two cars stalled at the start, one of them being MSA Formula regular Sennan Fielding, making his debut in the series this weekend.

Rump had a good restart, but Parsons continued to shadow him throughout the race. The KCMG driver managed to hold on, however, winning by under a second to extend his championship lead.

The duo were in a league of their own for the entire race, finishing nearly 25 seconds clear of third-placed Nick Rowe, who took his second podium of the season. In the closing stages, Rowe was forced to contend with a train of cars, led by Aidan Read, who eventually took fourth.

Just behind him was Chinese driver Jeffrey Ye, who made it three KCMG cars in the top five. Fast-charging Matthew Swanepoel was at the tail of the four-car train, finishing sixth after starting from the pits.