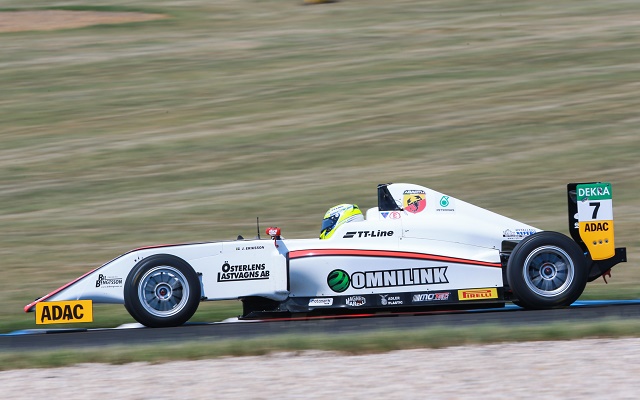 Having been parked for the opening race of the ADAC F4 weekend at Lausitz, Joel Eriksson rebounded in style by winning race two.

Eriksson pulled off a late pass on Joseph Mawson to take his fifth win of the season and strengthen his championship lead.

HTP’s Marvin Dienst was on pole again, having let the lead slip off the line in race one. This time around, things were even worse for the German, who briefly stalled and allowed 12 cars past.

With Mawson entering turn one in first, Eriksson followed suit, albeit nearly threw it away a couple of corners later by catching the gravel out of turn two.

However, he held on and was soon all over the Aussie leader, staying within half a second lap after lap.

Behind the battling duo, Janneau Esmeijer was running in third, followed by Mucke trio of David Beckmann, Robert Shwartzman and Mike David Ortmann.

Beckmann, however, would soon find the barriers in the final corner, destroying his right-side suspension.

With 12 minutes to go, Shwartzman overtook Esmeijer for third into turn one and the order was subsequently frozen due to a safety car.

The stoppage was caused by Glenn Rupp, who tried to pass Luca Engstler round the outside, but spun and beached his car.

When the race got going again with a little less than five minutes on the clock, Eriksson judged the restart perfectly, dashing to the inside line of Mawson on the main straight and taking the lead into T1.

The Swede then maintained first place long enough for the second safety car period, brought out by Michelle Halder, to end the race.

Mawson took second, ahead of Shwartzman, who recorded his fifth consecutive podium finish.

Esmeijer settled for fourth, ahead of Ortmann and a recovering Dienst, who managed to pass Neuhauser duo Tim Zimmermann and Kim-Luis Schramm.

Schramm ended up slipping down to ninth, behind Michael Waldherr, who produced an inspiring race from 33rd on the grid, and ahead of Jannes Fittje.