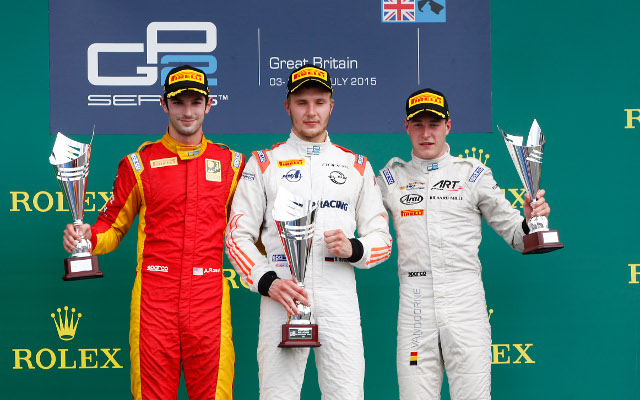 The Russian started from pole position but it was his fellow rookie Richie Stanaway that took an early lead after bursting through from third on the grid.

The safety car appeared after a first-lap collision at Brooklands between Nathanael Berthon and Artem Markelov, and Sirotkin was opportunistic at the restart to pass Stanaway down the inside of the penultimate corner, after the safety car line.

Nobuharu Matsushita also benefited to move into second ahead of Stanaway, but his race ended soon afterwards when he stopped with an apparent mechanical issue.

With the remaining frontrunners all running long into the race on the harder tyre, Stanaway lacked pace and was holding up Stoffel Vandoorne and Alexander Rossi behind him.

Rossi made his move on title rival Vandoorne down the inside of the Loop before passing Stanaway soon afterwards with a fine move around the outside of Brooklands. Vandoorne repeated that manoeuvre to pass the Kiwi a lap later, before the pair pitted.

When Vandoorne rejoined, he did so behind the British pair of Jordan King and Nick Yelloly who stopped early from the bottom end of the top 10. Rossi on the other hand beat his Racing Engineering team-mate King out of the pits to secure second.

Sirotkin was untroubled up front on the way to winning his first ever Silverstone race, 5.9 seconds ahead of Rossi.

Vandoorne cleared the early-stoppers to end up with a podium, though his unbeaten streak in feature races this season was brought to an end.

King was passed by the DAMS duo of Pierre Gasly and Alex Lynn but looked set to hold onto sixth under pressure from Arthur Pic. There was contact at the penultimate corner however, with King being tipped into a spin and out of the race.

Pic finishes a provisional sixth but is under investigation. Following him across the line were Raffaele Marciello and Yelloly, while debutant Oliver Rowland could inherit the reverse grid pole position for the sprint race if Pic loses sixth after holding off? Rio Haryanto for ninth.

Stanaway fell away after his pitstop and later retired with suspension failure, joining fellow Kiwi Mitch Evans out of the race after the Kiwi’s headrest flew out on the Hangar Straight.