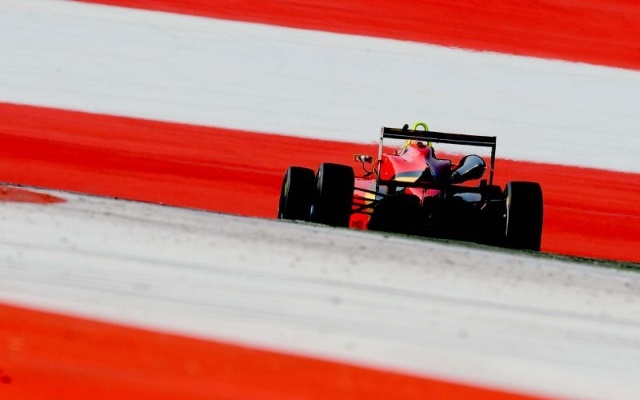 Starting seventh, the Italian rookie quickly fought his way up to second after a frantic opening lap to the race.

Pole-sitter Vitor Baptista stayed in the lead and was running in the clear right from the beginning, but the Brazilian ran wide at Schlossgold and ended up losing a whopping ten places.

Antoni Ptak brought out the safety car at the second corner where he was one of many running wide on the exit. The Polish racer lost control on the kerbs as he rejoined, delivering a hard hit to Alexey Chuklin‘s car.

It was Yu Kanamaru who led the race after the restart but soon the Japanese received a drive-through.

Emilio de Villota’s leading driver was set to start the race from fifth, but stalled for the formation lap. Although he was supposed to line up last on the grid as a result, he retook fifth and was subsequently penalised.

As such, Pulcini was now in the lead, trailed by Yarin Stern. The West-Tec driver could not keep second though, as he was overtaken by championship leader Konstantin Tereshchenko.

Pulcini built a lead of three seconds during the Russian’s move and he maintained that until the checkered flag.

Tereshchenko collected his seventh podium finish from nine starts season, while the top three was completed by Tanart Sathienthirakul, who completed a brilliant recovery, fighting his way up from last after stalling at the start.

Stern had to settle for fourth ahead of rookie Diego Menchaca and Igor Walilko.

Vitor Baptista, meanwhile, did not make it to the chequered flag.