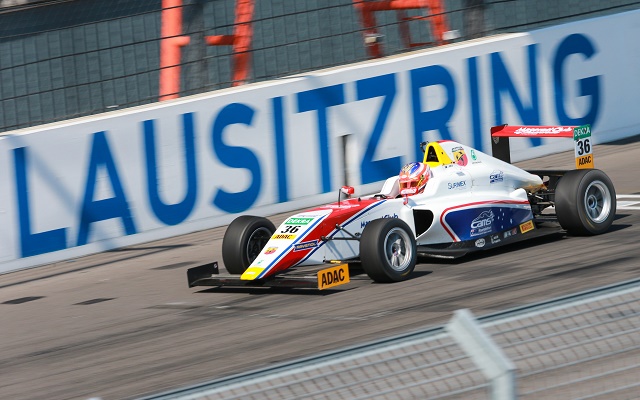 Van Amersfoort Racing’s Joseph Mawson has closed in on the ADAC F4 points lead by taking his second win of the season in race one at Lausitz.

With points leader Joel Eriksson barred from taking part in the race alongside Mick Schumacher and Glenn Rupp for ignoring red flags in qualifying, Mawson looked in prime position to capitalise.

And capitalise he did, converting a front row start into a win that takes him to within 13 points of Eriksson.

Off the line, Mawson beat poleman Marvin Dienst to take the lead into T1, with the German also losing out to HTP teammate Janneau Esmeijer.

The Dutchman then worked his way around Mawson to lead the opening lap, but was sideways on exit of T2 on the second lap, allowing the Aussie to muscle his way back into first place.

It was then that Mawson began to check out, putting in purple sectors and establishing a solid lead over Esmeijer.

Behind, Robert Shwartzman cleared Dienst for third and quickly began to reel in Esmeijer, who appeared to struggle massively for pace in the latter stages.

He bunched up the field behind him, allowing Mike David Ortmann to pass Dienst for fourth before following his teammate Shwartzman through on Esmeijer.

Under massive pressure, Esmeijer continued to lose spots and then got loose on the inside of T1, bumping into Tim Zimmermann with his right rear wheel and sending the Neuhauser driver into a spin.

But it was of little consequence for the Aussie, who controlled the restart and eased to the chequered flag.

Shwartzman took second, holding off Dienst, who had passed Ortmann slightly prior to the safety car.

The latter settled for a career-best fourth, ahead of fellow Mucke driver David Beckmann and Jannes Fittje, who picked up his first points in the series.