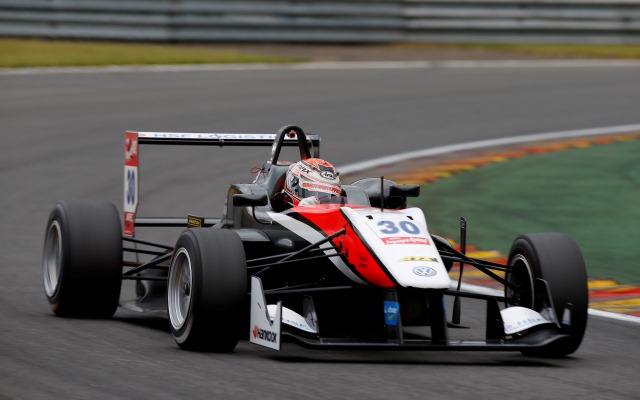 Max Verstappen claimed his second win in the FIA F3 European Championship in an eventful first Spa-Francorchamps race that saw championship leader Esteban Ocon retire after contact on lap one.

Ocon retained the lead from pole position into the first corner but was passed on the Kemmel Straight by Verstappen. Ocon then found himself squeezed between Antonio Fuoco and Lucas Auer entering Les Combes, forcing the Lotus F1 junior into retirement.

Despite a mid-race safety car when Antonio Giovinazzi and debutant Santino Ferrucci tangled and crashed heavily at Les Combes, Verstappen appeared to have the margin to second-placed Auer under control, but he was then caught by the Austrian on the penultimate lap.

It took an aggressive defensive move on the Kemmel Straight and contact between the pair for Belgian-born Verstappen to remain ahead and claim the victory.

Felix Rosenqvist also looked safe in third as the clock ticked down but he came under attack from Jake Dennis. Dennis got past into the Bus Stop for the penultimate time, and although Rosenqvist did get back ahead, he then fell down to seventh at the flag. Dennis thus completed the podium, just ahead of Carlin team-mate Tom Blomqvist, who was able to take a chunk out of Ocon’s championship lead. Fuoco held off Gustavo Menezes to claim fifth.

Felipe Guimaraes was eighth, Jules Szymkowiak made it all three Van Amersfoort Racing cars in the top ten, and Jordan King battled his way into tenth after starting on the back row.