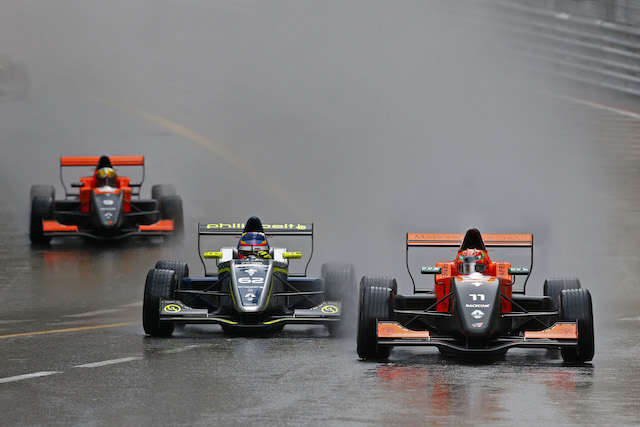 The race was delayed by barrier damage in the earlier Porsche Supercup race, and started with two laps behind the safety car due to the wet conditions.

At the start proper, polesitter Fenestraz ran a little deep into Ste Devote and had?Max Defourny right on his tail up to Massenet.

It was the Belgian however that would be passed at the top of the hill, thanks to an opportunistic move from?Ferdinand Habsburg.

Habsburg, who topped the qualifying classification but carried over a two-place grid penalty following a collision at Motorland Aragon, was in confident mood and even had a look at Fenestraz at Tabac later on the opening tour.

He briefly got ahead when he cut Ste Devote on the following?lap, before the race was then neutralised after?Bruno Baptista hit?Jehan Daruvala at the chicane as they fought over sixth.

That safety car period was extended when?David Porcelli – trying to catch the pack?after a spin at the hairpin on the first lap – lost control on the painted pit exit line approaching Ste Devote and slammed into the barriers.

The race restarted after only three laps however, with Fenestraz managing to maintain a lead over Habsburg.

Behind, Defourny got wide at the Rascasse, allowing?Dorian Boccolacci to put his nose down?the inside. The former Formula 3 racer would complete a move for third into Ste Devote.

A lap later, a similar move happened at Rascasse with?Gabriel Aubry attacking?Harrison Scott?over seventh. He attempted to replicate?Tech 1 team-mate Boccolacci’s pass into Ste Devote but only had a slight overlap, and Scott tried to take the apex as usual, causing a collision that put both into the barriers.

With Will Palmer and?Julien Falchero behind them running over?Scott’s front wing and diving down the escape road respectively, the red flags were brought out.

This appeared to be a little premature, since Scott was able to?move his car?behind the barriers and Aubry got going up the hill.

There were six minutes left on the clock but, with proceedings starting?into the time allocated for the?Formula 1 pit lane walk, the decision was taken not to restart.

Fenestraz therefore secured victory, having finished no higher than seventh in his previous six Formula Renault starts across Eurocup and NEC.

The Franco-Argentine, who won twice on the streets of Pau in French Formula 4 last year, achieved what his sister’s fiancee (and two-time World Touring Car champion) Jose Maria Lopez couldn’t in his title-winning Formula Renault V6 Eurocup campaign in 2003 by winning the?Monaco race.

Results were taken at the end of lap six, allowing Defourny to hold onto third place over Boccolacci.

Nikita Mazepin started and finished fifth on his Formula Renault return. He was under pressure from AVF team-mate Henrique Chaves before the red flag, but Chaves ends up classified seventh behind another AVF driver Scott. Falchero, Aubry and Palmer complete the top 10.

Banished to the back of the grid after a technical infringement robbed him of pole position,?Lando Norris?climbed from 22nd to 18th.?Defourny getting third rather than fourth is enough for the R-ace GP driver to take the points lead away from Norris.