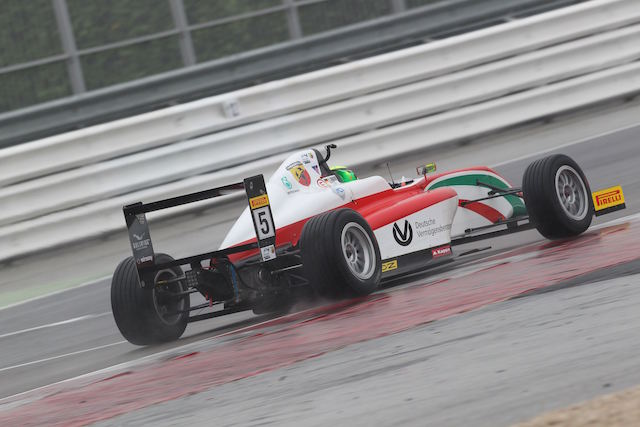 Mick Schumacher picked up another Italian Formula 4 race?two at Imola, which was spent mostly behind the safety car in wet conditions.

The race began with three laps behind the safety car, even though the pit straight was the only area with significant levels of standing water.

When the race did eventually get going, the 31-car field was unable to?navigate?a lap without incident, and the safety car came back out to recover cars from two separate locations.

At the restart, second-placed?Diego Bertonelli was handed a drive-through penalty for a start infraction, and was briefly passed by Marco Siebert at the Variante Alta, but managed to regain the place.

After one lap of green flag racing, the safety car returned after?Giuliano Raucci?ended up in a?Tamburello gravel trap. With time running out, that?would effectively be the end of the race.

“It’s just a shame we could race so much, but those are the rules and we have to respect it,” said Schumacher afterwards. “I hope the next race will be a little bit more under race conditions.”

The final safety car prevented Bertonelli from serving his drive-through, but it will likely be converted to a time penalty that will drop him outside of the top 20. He will be starting race three on reverse-grid pole however, based on the race one results.

Siebert should?inherit?second place to extend his points lead, ahead of?Jenzer team-mate?Job van Uitert?who made good progress from sixth on the grid in the limited racing time.

Ye Yifei, Lorenzo Colombo and?Raul Guzman were next, with the Mexican surviving a run across the gravel at the Variante Alta at one stage.