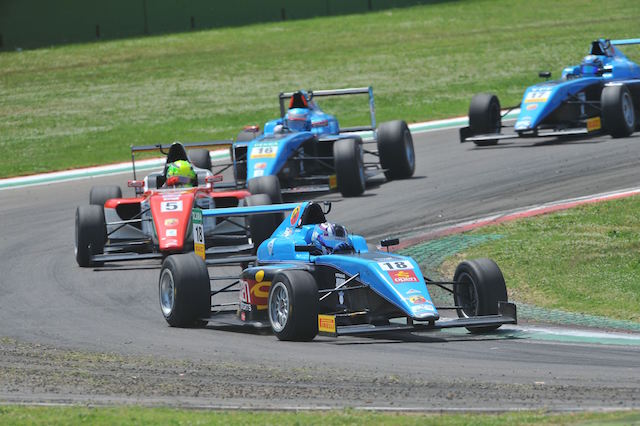 Italian Formula 4 leader Marcos Siebert?resisted an attack from?Mick Schumacher to win the first race of round three at Imola, which had two safety cars and a red flag.

With grid numbers down on the over-capacity field that started the year at Misano, the series has revered to its regular format of three races with all drivers taking part in each race.

Siebert led from pole position, while Schumacher came from fourth to pass?Maurizio Baiz and?Job van Uitert on the first lap.

He then cut the gap to the Argentine out front from 1.5 to 0.4 seconds in two laps, before a safety car was triggered by his Prema team-mates Juri?Vips?and?Juan Correa?ending up in the pitlane entry after contact.

At the restart, Schumacher – fighting with a missing front wing endplate – got side-by-side with Siebert into Piratella but Siebert stayed ahead on the inside.

The safety car was soon back on track after?Federico Malvestitti?was sent into a roll on the inside of Rivazza, but he walked?away seemingly unharmed.

The race would end early after another incident at Tamburello between?Diego Ciantini and?Lorenzo Colombo?over fourth place that spun the former into the gravel trap.

They held onto fourth and fifth in the results, with Ciantini making it a 1-3-4 result for Jenzer behind Siebert, Schumacher and van Uitert.

That meant both of Siebert’s closest title rivals failed to score, with?Raul Guzman pitting in the middle of the race out of 15th place. Siebert now leads the Mexican by 35 points.