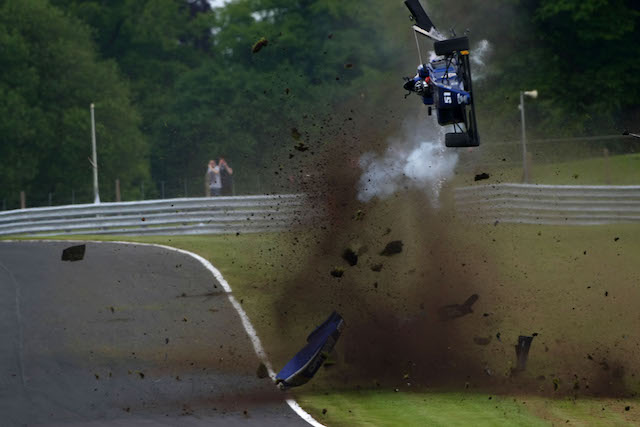 Collard had taken pole position ahead of?Colton Herta, who is driving the remaining?Carlin entry for the second time this season with?Lando Norris on Formula Renault duty in Monaco.

Herta was jumped at the start by?Thomas Randle, who then began challenging Collard. Herta remained in the fight though, with the top three covered by little more than a second after five laps.

Collard extended his margin to 0.9 seconds on the next lap but race would come to a premature end?on lap seven, when Vaidyanathan tangled with?Sisa Ngebulana?as they fought?over ninth.

Vaidyanathan was able to pull ahead of?Ngebulana exiting Old Hall and into the right kink that followed, but contact was made between Vaidyanathan’s rear-left wheel?and Ngebulala’s front-right.

This sent Vaidyanathan’s car flipping multiple times through the air before coming to a rest, bringing out the red flags. The Indian was taken to the medical centre but released with no injuries.

Ngebulana was excluded from the results for his part in the incident (although he and Vaidyanathan were left out of the classified finishers?anyway?because they were not running when the red flags came out) and was given four penalty points.

Collard got full points for his win, increasing his advantage to 32 over Randle, who’s?overtaken?Matheus Leist despite the Brazilian finishing fourth thanks to an early pass on?Jan Jonck.