Last weekend was all about the national Formula 3 championships in Britain, Italy and Germany and their respective feeder series…

The fourth round of the British F3 season at Rockingham saw Jazeman Jaafar move into the points lead, with Jack Harvey also winning and taking advantage of a poor weekend for erstwhile leader Carlos Sainz Jr.

Racing Steps Foundation man Harvey took a double pole in qualifying, but it was Petronas-backed third-year driver Jaafar who took victory in the first race after a flying start from third on the grid. Reigning Formula Renault UK champion Alex Lynn finished in second place, ahead of Fortec teammates Felix Serralles and Hannes van Asseldonk, while Harvey failed to capitalise on his starting position and fell to fifth. He led home fellow Carlin drivers Pietro Fantin and Harry Tincknell and Sainz, but the Red Bull-backed Spaniard was later handed a 30 second penalty for not respecting track limits, dropping him to ninth.

Tincknell scored his first win of the season in the second race, after starting on the front row. Fantin was a close second, with Harvey completing the podium. Serralles got the better of van Asseldonk for fourth, with Jaafar in sixth. Sainz finished down in 12th after a clash with Fahmi Ilyas caused him to spin.

Harvey made a good start from pole at the second attempt in race three, allowing him to claim his first victory since the very first race of the season. It was a dominant performance, coming home 22 seconds clear of Lynn. Sainz rescued his weekend with a third place ahead of Jaafar, van Asseldonk and Serralles.

Jaafar now leads the standings on 137 points, with Harvey his nearest rival on 124 while Sainz has 117. Brands Hatch hosts the fifth weekend of the season on 23-24 June.

Mugello marked the third round of the season, and the first on Italian soil and therefore the opening round of the Italian classification. European series leader Eddie Cheever won the first race from pole, although Prema teammate and Ferrari driver Brandon Maisano did take the lead at the start before being forced to settle for second. Riccardo Agostini was third, ahead of Henrique Martins and Sergey Sirotkin.

Maisano again got ahead of Cheever at the start of race two, and this time made it stick to finally score his first win of a season he started as the title favourite. The battle for third saw contact between Agostini and Martins on the final lap, causing the Brazilian to stop. Agostini crossed the line in third but was later penalised, allowing Mario Marasca to inherit the final podium place ahead of series returnee Maxime Jousse and Gerard Barrabeig. 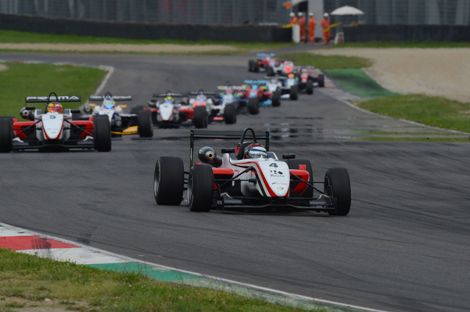 Cheever was the top scorer from the weekend and therefore extends his European series lead on 114 points, with Maisano on 90 and Martins and Agostini tied on 81. Cheever heads the Italian series on 42, with Maisano on 38. Round four takes place at Misano on 7/8 July.

In Formula Abarth, Luca Ghiotto won the weekend’s opening race from pole position, with title rivals Bruno Bonifacio and Nicolas Costa completing the podium. Race two saw Bonifacio win from lights to flag, with Kevin Jorg and Santiago Urrutia in second and third, while Uruguay’s Urrutia then won the reverse grid race three from second on the grid, ahead of Emanuele Zonzini and Bonifacio. Bonifacio has moved into the lead of the European points on 104, with Ghiotto on 99 and Costa on 94.

The second round of the German F3 Cup took place at the Sachsenring, with Japanese driver Kimiya Sato producing a near perfect weekend to lead the points.

Sato won the first encounter from pole position, with Lotus teammate Jimmy Eriksson finishing second after getting by Tom Blomqvist – who was making his return to the series.

In race two Rene Binder scored his first win in the series from the reverse grid pole, while Sato came through from seventh to second ahead of Eriksson.

Sato won again in race three, getting the better of polesitter Blomqvist at the start. Blomqvist was forced to settle for third after also being passed by Lucas Auer. 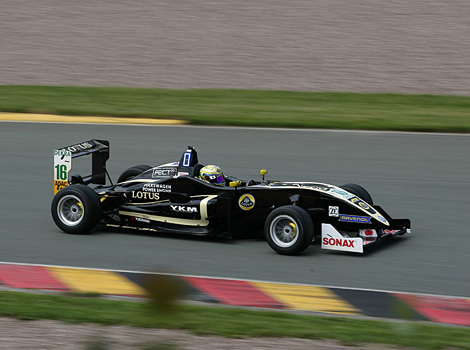 Sato has a decent lead on 101 points, with Eriksson his nearest challenger back on 73 and Auer on 65. Round three takes place at Oschersleben on 7/8 July.

Sachsenring also played host to round three of ADAC Formel Masters. Swede Gustav Malja got the better of points leader and polesitter Marvin Kirchhofer in the first race, with Dutch driver Indy Dontje scoring his first podium in third. Malja started the second race from pole and won again, this time with Jason Kremer and Jeffrey Schmidt joining him on the podium. Race three only lasted two laps after Florian Herzog lost control and collided with a safety vehicle parked on the outside of the corner.

PaddockScout Driver of the Weekend: A near perfect weekend for 22-year-old former Euro Series racer Kimiya Sato, at a circuit he had never raced at before.

Next week: Le Mans seems to make for a quiet weekend, but Formula Pilota China gets underway in Shanghai.