GP3 title favourite heads the standings after round one, Giedo van der Garde ends his GP2 winless streak, while a Ferrari protege dominates in Pau..

Mitch Evans was the overwhelming pre-season favourite in GP3, although things didn’t initially go as well as expected at the Barcelona season opener – the Kiwi youngster only managing fourth on the grid with his expected main rival Antonio Felix da Costa on pole. Sixth-place starter Daniel Abt made a stunning start to the race to take the lead – but it was too good for the stewards who penalised both him and Felix da Costa for jump starts.

Evans inherited the lead and the victory, ahead of Marlon Stockinger, improving on his best result of 2011 of tenth, and Aaro Vainio, the young Finn repeating, like Evans, his result from the same race 12 months ago. Formula Abarth Italian champion Patric Niederhauser had an impressive debut run to fourth ahead of Matias Laine, Conor Daly, Tio Ellinas and Robert Visoiu.

Visoiu started race two from pole but was beaten into the lead by Ellinas, only for the Cypriot to receive a drive-through for a jump start. Daly had also made a quick (but crucially, legal) start and so it was the American who inherited the race lead, claiming his first win in GP3 ahead of 16-year-old rookie Visoiu and second-year Laine. Vainio, Niederhauser, Abt, Felix da Costa and Alex Brundle completed the top eight.

Evans suffered a puncture early on and thus only finished 20th, but remains in the points lead on 25, two ahead of Daly and Vainio who are tied for second. The series makes its first visit to Monaco for round two.

The talking point before the weekend in GP2 was whether anyone could stop Davide Valsecchi from running away with the title after his domination of the Bahrain rounds. And it seems the answer was yes. Rookie James Calado continued his impressive run of form with pole position for the feature race.

He was leading Fabio Leimer through the first stint but both were beaten in the pitstops by Giedo van der Garde. The Caterham driver retained the lead under pressure until the finish to score his first win in the series since Monza in September 2009. Calado and Stefano Coletti completed the podium after Leimer was penalised for an unsafe release from his pitstop. Valsecchi, Nathanael Berthon, Fabio Onidi, Max Chilton and Luiz Razia rounded out the top eight.

Razia started the sprint race from pole – a great opportunity to claw back ground on Valsecchi. He successfully converted pole to victory number two of the season. Berthon had an impressive drive and finished second after running close to Razia early on. Valsecchi completed the podium ahead of Calado, Chilton and van der Garde, with Esteban Gutierrez and Coletti seventh and eighth. 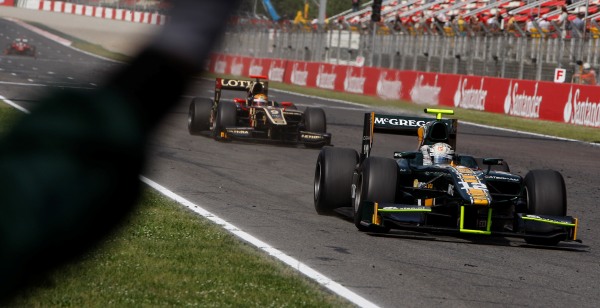 Valsecchi leads by 25 points over Razia, in what is increasingly becoming a two-horse race after a second less-than-satisfactory weekend for Gutierrez. The Mexican has fallen to fifth behind Calado and van der Garde, who are 60 and 69 points adrift of Valsecchi respectively. Round five is in Monaco.

The Pau Grand Prix is one of the classics on the junior racing calendar, and this year was a British F3 event but also counted towards the FIA’s European Championship. And it was one of the European runners Raffaele Marciello who would be the man to beat all weekend, after getting things off to a flying start with a pole position for both races.

The Ferrari Driver Academy youngster, who only turned 17 last December, was leading the opening race ahead of Daniel Juncadella and Pascal Wehrlein until the reigning ADAC Formel Masters champion Wehrlein ruined a promising performance by colliding with Juncadella when he tried to pass at the very tight hairpin. After a safety car intervention, Marciello built up a six second gap over leading British series runner Jazeman Jaafar to win. Alex Lynn, Felix Rosenqvist, Jack Harvey and Carlos Sainz Jr filled positions three to six.

Marciello was again in a field of his own in the main event on Sunday, winning by an impressive margin of 13 seconds. Sainz was second, with Jaafar third and Juncadella fourth. Fifth went to Pipo Derani, sixth to Rosenqvist, seventh to Lynn and eighth. 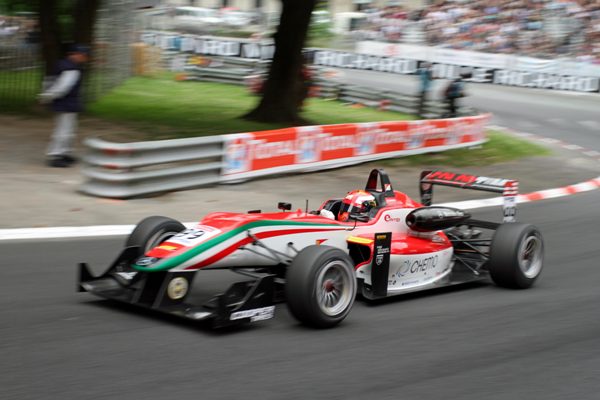 The F3 drivers weren’t the only budding young drivers racing around the streets of Pau. In Formula Renault ALPS, Daniil Kvyat was hoping to continue the perfect start to his 2012 campaign that had seen him claim double victories in the ALPS and Eurocup season openers. It wasn’t to be though, with the French contingent mostly dominating the weekend on home soil.

Norman Nato won the first race from pole position ahead of compatriot Paul-Loup Chatin, while 16-year-old Brazilian Felipe Fraga stunned in just his second race weekend in cars to claim third place around the challenging street circuit. Matthieu Vaxiviere, double winner at Pau in French F4 last year, was fourth ahead of another French F4 graduate Patrick Kujala. Kvyat was only seventh, behind Melville McKee.

Race two saw Chatin win from pole ahead of Nato with Vaxiviere and William Vermont completing a French lockout of the top four. Kujala was the best of the rest in fifth ahead of Aurelien Panis, son of Olivier. Kvyat crashed out on lap three.

Chatin takes the points lead, ten ahead of Nato and 19 ahead of Kvyat. Round three sees a return to Italy and Imola.

Alexandre Baron continued his unbeaten run in qualifying by taking both poles in Pau, and successfully converting the first of those into a win. Victor Sendin and Simon Tirman initially held second and third, until being handed drive-throughs for jump starts. Simon Gachet finished second, with Portugal’s Francisco Abreu in third.

In race two it was Baron who made the jump start, handing victory on a plate to Sendin with the two Simons, Gachet and Tirman, in second and third.

Although Baron and Sendin have scored near-identical race results in the two rounds so far, it’s Baron’s four poles that give him a seven point advantage in the standings. Val de Vienne holds round three in June.

PaddockScout Driver of the Weekend: It absoltely has to be Raffaele Marciello. Not only a double-winning display, but an utterly dominant one at that .