PaddockScout takes a look back at the first weekend of the 2013 season proper, as title races begin in GP2 in Malaysia and the F3 European Championship and Auto GP at Monza.

Coletti quick, but still hard on his rubber

Stefano Coletti had set the fastest time on two of three days of the final pre-season test in Barcelona, adding his name to the list of potential challengers for pre-season favourite James Calado. In qualifying in Malaysia, he edged out Calado by just 0.004 seconds for pole position. Calado’s fellow second-year driver Felipe Nasr was the same distance further back in third.

But while he had to make do with fourth on the grid, Fabio Leimer made a flying start. Coletti held the lead ahead of the Swiss driver, but having built up a reputation for struggling to make his tyres last in previous seasons, it was unsurprising when Leimer caught him as the first stint of the race wore on. Though Coletti managed to keep his lead after the stops had played out, his earlier change of tyres meant that, inevitably Leimer was always going to get past before the end, and so did Calado.

Coletti was back in the lead on Sunday thanks to a great start of his own, but again he struggled to make his tyres last, just holding on under late pressure from Nasr, who was fourth on Saturday. The Rapax driver has taken an early points lead and proven he has the speed to be champion, but his success will be determined by how well he can handle his disadvantage with tyre wear.

Leimer finished the sprint race down in 12th after an off-track moment, but still holds second in the points. His feature race win was his first since late 2011 – he was amongst the quickest drivers over the course of 2012 but some misfortune and mistakes left him win-less. If he can shake that off and score consistently top results, he could be hard to beat. 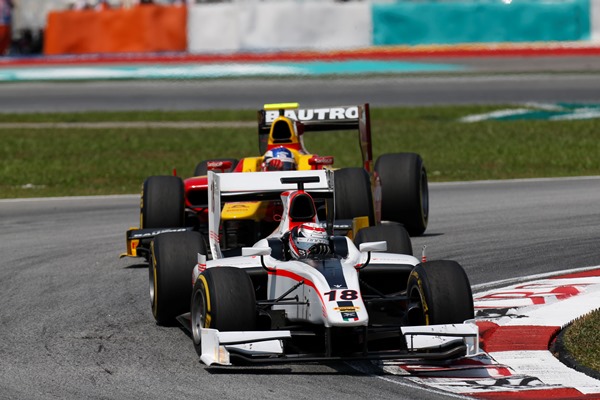 Fourth and second was a good return for Nasr, suggesting he should be a consistent threat at the front for the duration of the season. At the same time, the Brazilian Carlin driver could do with getting that maiden win monkey off his back sooner rather than later. Having qualified third in Bahrain last year, he’ll have high hopes for Sakhir.

Second place in the feature race was a decent enough start for Calado, though he was slightly disappointed to have slower pace than Leimer. It’s hard to know whether that was a factor in the uncharacteristic error that took him out early of race two. Having fallen back behind Leimer again at the start, he was caught out by the Racing Engineering man braking earlier than he expected, knocked his front wing and clattered into the second RE car of Julian Leal and into the gravel. He held his hands up and apologised, but not only has it left him chasing a points deficit to the more-experienced Coletti and Leimer, but he has also been slapped with a ten-place grid penalty for Bahrain. How he recovers could make or break his crucial season.

Elsewhere, GP3 champion Mitch Evans was the star debutant. Starting the feature race a fine fifth, he moved ahead of the squabbling Calado and Nasr up into third at first. He fell back as far as tenth, but a third-place from there in the sprint was superb, particularly as he’d been suffering from food poisoning, in the most physically demanding car and weather conditions the 18-year-old had ever raced in.

On the other hand, fellow GP3 graduate Daniel Abt had a weekend to forget, qualifying well down the order and retiring from the first race after he slid off track and stalled. He’s taken time to get into his stride before, such as in GP3 last year, and will surely improve as the year goes on.

Two drivers rivalled the top four on performance without getting the same results. Sam Bird had been fifth fastest in qualifying on his first day back in a GP2 car since 2011 but despite a grid penalty for impeding and a drive-through for ignoring yellow flags, he raced to seventh place and set the fastest lap on the way. He was another to take race-ending contact from Calado at the start of the sprint race, but once he and Russian Time truly hit their stride, he could be as fast as anyone.

Fellow Englishman Jolyon Palmer joined Abt towards the rear of the field in qualifying after struggling with a sticking throttle, but after climbing into the front half of the field at the start, he stayed out in the lead in his opening stint on the harder tyre and finished up in sixth. He would have to come from the back again in the sprint after stalling on the formation lap, but put in a load more overtakes to finish just outside the points in ninth.

Finally, a former teammate of both Bird and Palmer, Marcus Ericsson, did nothing to prove his doubters wrong. Traffic played its part in him qualifying 13th, but only he was to blame for his lap one exit from the feature race after tripping over Palmer under braking. Starting from the back in the sprint, he failed to make the same progress as Palmer. If he is to take DAMS’ third straight drivers’ title and finally deliver on the promise his early career showed, he’s got work to do on his pace and his racecraft.

Report: Coletti holds on under pressure from Nasr to win Malaysia sprint

The first season of the FIA’s revamped F3 series had looked set to be a battle between Raffaele Marciello and Pascal Wehrlein?after they finished second and third last year, but Wehrlein’s surprise last-minute call-up to the DTM had ruled him out of contention. He still went to Monza though, and began his F3 send-off well when he beat home racer Marciello to a double pole for races one and two.

Ferrari protege Marciello made the best start to race one though, jumping into the lead and starting his title bid with a victory. Embarking on his first full season at this level, Lucas Auer crossed the line second for a Prema 1-2, forcing Wehrlein to settle for third.

The rain came down for Sunday’s two races, but that didn’t stop a battle between Marciello and Wehrlein for the win. On the first racing lap after a safety car start the German ran wide and let his rival through, but he would fight back again later on to claim the victory. Conditions seemed even worse in race three, with Marciello managing to hold his lead from pole over Wehrlein until the race was red flagged. 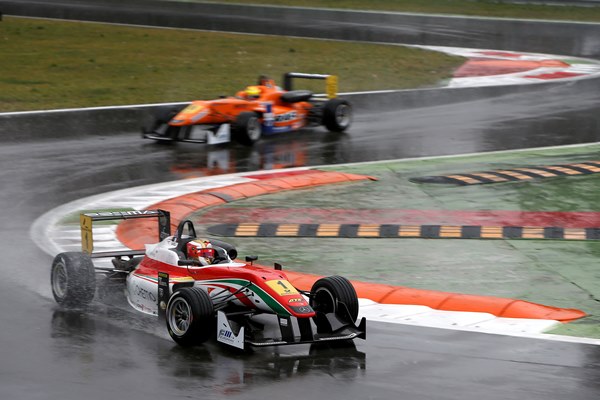 With Wehrlein moving on, will anyone get close to Marciello? (Photo: FIA F3 Europe)

With Wehrlein unlikely to add to his points tally, Marciello leaves with a healthy margin in the championship over his nearest true rival, with 55.5 points to Auer’s 24. The Austrian crashed out before the racing even began in race two but took fourth in the final encounter. He still had an unexpectedly stronger weekend than Alex Lynn, nominated as Prema’s number two and seen by many as Marciello’s nearest rival for the title in Wehrlein’s absence. Slightly disappointing qualifying results led to him finishing eighth and sixth in the first two races, but he did manage to hold third in the final race, albeit unable to keep up with Marciello and Wehrlein.

He sits fifth in the standings behind fellow British F3 convert Harry Tincknell. With two fifths and a sixth, Carlin’s lead driver enjoyed a good and consistent weekend, but that’s really a bare minimum for a third-year F3 driver. What will be interesting to see over the remainder of the campaign is whether he can join Prema’s fast trio at the very front in terms of pace. There were decent showings from two more Brits, Tom Blomqvist and Will Buller, who translated strong pre-season form into good finishes, but mixed that with collisions – Blomqvist causing one and being penalised while Buller was an innocent bystander in one.

Now in his third season at this level and with Wehrlein’s departure making him the clear number one again at Mucke, Felix Rosenqvist should be able to take the fight to Marciello. An 11th, seventh and 12th in qualifying however was not the greatest start, and he finished the weekend with just one fourth place in terms of points finishes, and lies ninth in the standings.

Report: Marciello storms to victory in opening race at Monza

With only a handful of the teams and drivers having done any mileage with the upgraded Auto GP car before practice on Friday at Monza, there was always a risk that the weekend’s results could be a little unrepresentative. That explains why 47-year-old restaurateur?Giuseppe Cipriani, having undertaken the series’ official shakedown of the new car, was able to qualify ahead of Zele Racing’s pairing of Formula Two champion Luciano Bacheta and HRT F1 refugee Narain Karthikeyan.

Riccardo Agostini came in as a favourite for many after taking last year’s Italian F3 title, and began by claiming a home pole position. He struggled for pace in the race though, and it was Cipriani’s other driver at his new Ibiza team Sergio Campana who claimed the win, having only taken up the drive days earlier. Kimiya Sato took second, while Vittorio Ghirelli crossed the line third only to be penalised for corner cutting and dropped behind Robert Visoiu.

Sato was incredible in the wet on Sunday, quickly fighting through to take the lead from polesitter Bacheta and establishing a 20 second lead by the end of the 14 lap race. Ghirelli finished in third, even if he did crash in the spray after the chequered flag.

Sato has a three-point advantage over Campana at the head of the standings, but it remains to be seen whether either can maintain their pace as the season continues under more level conditions. Ghirelli looks fast in third place and has a top team in Super Nova, while more should also be expected of Visoiu, Bacheta and Agostini, who complete the top six ahead of Karthikeyan, whose future participation is yet to be determined.

Next round: Marrakech, 6-7 April

Marciello was given a tough challenge by Wehrlein who outdid him in qualifying, but the Ferrari protege bounced back to take two wins. He wasn’t far from making it a triple win – a near-perfect start to his title bid.

Nieto and Pohler to continue with DAV Racing in F3 Open