After skipping last weekend’s races at Assen, Tom Blomqvist arrived in Austria and scored a double pole position, and converted the first of those into a lights-to-flag win in race one in drizzly conditions. Mitchell Gilbert finished second and Alon Day in third, while points leader Jimmy Eriksson was only 11th after a first lap off and an early change to slicks.

Lucas Auer took his maiden F3 win in the reverse grid second race, with Blomqvist coming through to finish second on the road, only to be later penalised 30 seconds “for having deliberately gone off the track several times.” Gilbert therefore inherited second ahead of teammate Yannick Mettler while Eriksson was fourth.

Blomqvist won again from the front in race three, with Auer completing his best weekend to date with second place. The Austrian resisted late pressure from Eriksson who rescued his weekend with third.

Eriksson’s teammate and nearest rival Kimiya Sato also had an off-par weekend, meaning the Swede retains a healthy lead of 75 points over the Japanese, who in turn is coming under pressure from Auer. Auer narrowly heads Gilbert in the rookie classification. Three weekends remain, the first of which comes at Lausitz on 25/26 August.

Gustav Malja took the lead of the ADAC Formel Masters points lead away from Marvin Kirchhofer at Spielberg, even though the German rookie won the third of the weekend’s races. 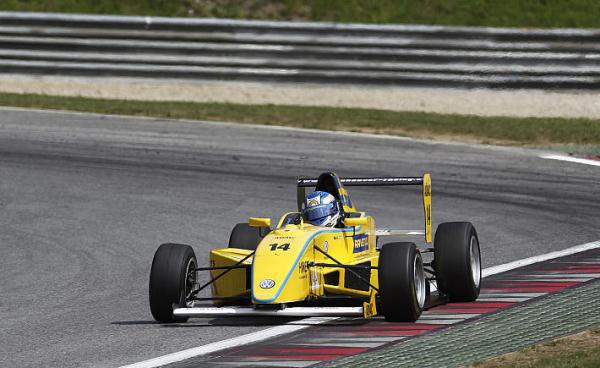 A wet qualifying saw Kirchhofer down in 11th on the grid for the first race, and things were to get worse when he tangled with Lotus teammate Kuba Dalewski and retired. Roy Nissany only qualified in ninth, but that didn’t stop the Israeli (son of one-time Minardi tester Chanoch) from claiming his maiden victory after getting past Belgian Alessio Picariello. Malja dropped back from his second-place starting position to begin with, but fought his way back through to second ahead of Picariello.

Picariello was on pole for race two, and he successfully converted that into his second win in as many Formel Masters meetings. Malja started tenth, but came through to secure another second place – a result that handed the 16-year-old Swede the championship lead. Dalewski completed the podium, while Kirchhofer finished seventh after starting in 17th and last.

That result gave Kirchhofer a place on the front row alongside Florian Herzog on the reverse grid for race three, and he took the lead at the start to claim his fourth win of the year and salvage something from his weekend. Jason Kremer took second place while Thomas Jager claimed a podium finish on home soil in third ahead of his Neuhauser teammate Malja and Piccariello. While Kirchhofer was unchallenged up front, his four teammates had a battle over sixth that resulted in a collision between Dalewski and Beitske Visser.

Kirchhofer’s win brings him back to just two points behind Malja, while Kremer is 20 points off the leader with those three rounds remaining.

PaddockScout Driver of the Weekend: Tom Blomqvist – A nearly unbeaten weekend from the son of Stig, even if it was soured slightly by his race two penalty.

Next weekend: The F3 Euro Series season enters the second half of the season at the Nurburgring.