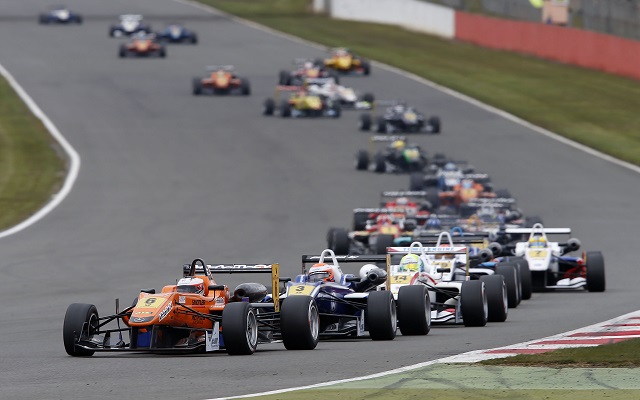 Felix Rosenqvist opened his 2013 win tally during the second European F3 race at Silverstone, taking a commandeering victory in a race which saw him pass Harry Tincknell for the lead twice over.

Rosenqvist got a better launch of the line than Tincknell and headlined the field under safety car conditions, brought out by Felix Serralles running into the stalled Antonio Giovinazzi during the start. However, as the race went back into green flag conditions, Rosenqvist slowed down immensely and was re-passed by Tincknell and Will Buller right after the safety car line.

The Mucke man was not content with letting the win slip and, showing a much better pace than the Brits ahead of him, passed Buller and then Tincknell, running the rest of the race unopposed until he crossed the checkered flag in first. With Tincknell running out of tyre life by the end, he was caught up to by Buller, but the T-Sport driver clipped the grass on entry into one of the corners and spun out, rejoining in tenth.

It was Raffaele Marciello, then, who finished runner-up after losing lots of places during the start – the Italian managing to fight back through the field and overtaking Tincknell shortly before the end of the race. Lucas Auer finished third ahead of Tincknell, who held off Tom Blomqvist.

A brilliant race from Alex Lynn after an early-on spin saw him make it to sixth from 20th, as he overtook Josh Hill on the very last lap. Finally, Pipo Derani and Buller were eighth and ninth, while Eddie Cheever, Jr. completed the top ten, making it the third time out of five that all the Prema cars finished in the points this year.