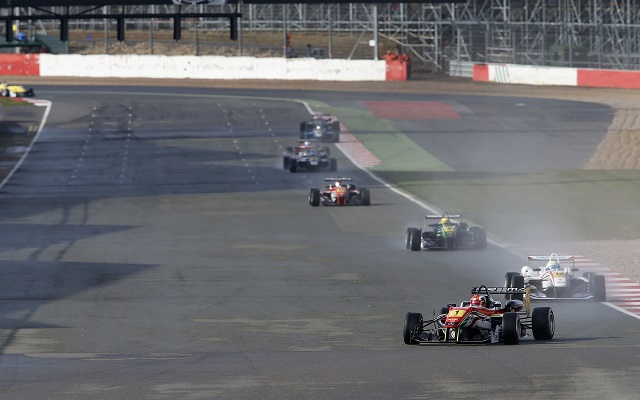 Italian Ferrari Driver Academy youngster Raffaele Marciello took his third win of the season in the final race of the Silverstone European F3 round, overcoming a lacklustre start to snatch the victory away from Felix Rosenqvist in the final laps of the race.

While Brit Alex Lynn started the race from pole, it was Rosenqvist who led into turn one, having been third on the grid. After mayhem on lap one, the race endured a safety car period, after which Marciello managed to overtake Lynn for second.

The Italian immediately started closing in on Rosenqvist and tailed him for several laps, unable to find a way past before managing to take the Swede round the outside. From there on out, it was a comfortable race for Marciello, who crossed the line in second place to take his first Silverstone victory, finishing ahead of Rosenqvist and Lynn.

Felix Serralles put in an electrifying performance to finish fourth after starting 19th, with Brits Will Buller and Jordan King finishing behind him. Lucas Auer was seventh, ahead of Jann Mardenborough, who scored his maiden points in the series. Another Carlin driver, Harry Tincknell, took ninth ahead of his teammate Nicholas Latifi, who completed a race for the British team that saw all of their cars make it to the points.

In the standings, Marciello leads Rosenqvist by a comfortable 36.5 points. Thanks to his race one win, Tincknell occupies third, with Prema drivers Lynn and Auer right behind.

The next round of the series will be supporting the DTM opener on 4-5 May at Hockenheim.