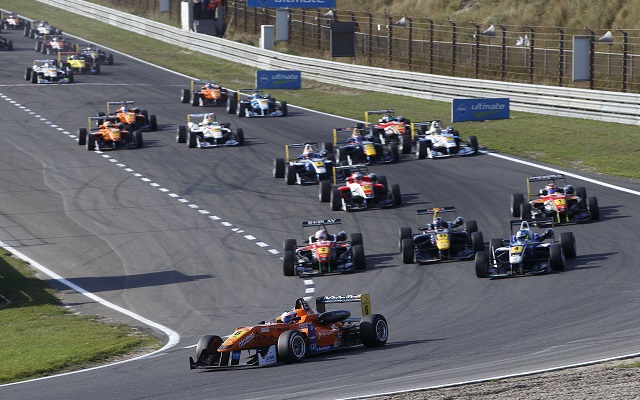 An official entry list released by the FIA for the European F3 championship has confirmed the participation of Felix Rosenqvist and several other previously unannounced drivers.

Rosenqvist, 22, will be entering his fourth year in European F3, having finished a close runner-up to champion Raffaele Marciello last year. The Swede spent all of his three prior years in the series with Mucke and secured a combined total of 15 victories.

The entry list also sees the confirmation of Fortec’s FIA F3 lineup as the team elects to field Mitch Gilbert and John Bryant-Meisner, who share the same management. 19-year-old Gilbert was fourth in German F3 in 2012 but had a tough campaign in 2013 after his switch to FIA F3 with Mucke, taking only 10 points on his way to 23rd in the standings. Meanwhile, Bryant-Meisner, also 19, made a triumphant return to racing in 2013 after being sidelined for most of 2012 with an injury. He took two victories in German F3 on his way to fifth and managed to impress Fortec on his guest outings with the team in European F3.

“We?re absolutely delighted to have received 30 entries for the FIA Formula 3 European Championship”, stated the President of FIA’s Single-Seater Commission Gerhard Berger. “The entry list, comprising twelve great teams, looks fantastic with experienced drivers and a dozen or so rookies whose performance will be highlighted by a separate classification. Given the overall level, we?ll have another exceptional champion this season.”

The 2014 FIA F3 season will kick off at Silverstone on April 19-20 and will span 11 rounds, concluding in October with the series’ second visit to Hockenheimring.