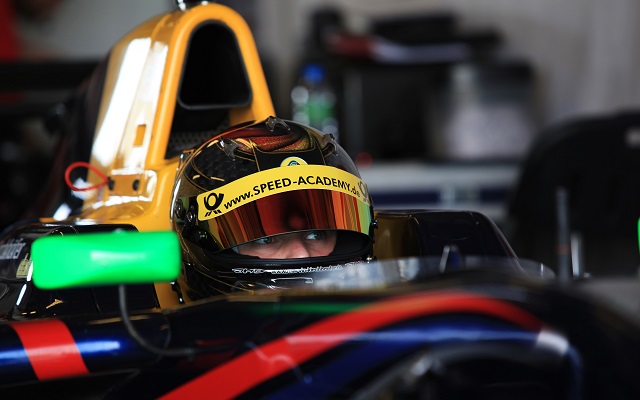 Reigning German F3 champion Marvin Kirchhofer will make the switch to the GP3 Series this year, having signed a deal to race with the category’s undefeated teams’ champions ART Grand Prix.

The 19-year-old made his debut in single-seaters just two years ago after a superb career in national-level karting. He joined Motopark for his rookie season in ADAC Formel Masters and wound up narrowly beating Gustav Malja to the title of the prestigious German category.

He graduated to German F3 the next year, continuing with Motopark, and was immediately right at home as he took the win in the opening race. He would add 11 further victories over the course of the season and would not finish lower than fourth place throughout all 25 races, all of which allowed him to dominantly secure the drivers’ title.

He tested with Arden and the Motopark-operated Russian Time over the post-season but his chances of joining the latter team fell apart when Motopark ended their partnership with the brand. Kirchhofer also tested FIA F3 machinery, appearing in private sessions with Prema and, more recently, Fortec.

“It?s really a pleasure for me to compete in the GP3 series and to be joining ART Grand Prix”, stated Kirchhofer. “I?m looking forward to this new challenge which is the biggest of my career so far. For me, ART Grand Prix is one of the best teams in the field as their records surely testify. It will be exciting to grow with this team as I know they will give me the best support and that?s one of the keys to a good adaptation. It?s too early to set myself a target. My first test in Abu Dhabi went well: the speed was there and I was consistent, but we have to wait for the winter tests to know where we are and what to aim for in my first season in the series.”

French squad ART Grand Prix is the most successful operation in GP3’s four-year history, having secured the teams’ title on all four occasions. They took the drivers’ championship in 2010 and 2011 with Valtteri Bottas and Esteban Gutierrez respectively, while 2012 and 2013 saw ART’s Daniel Abt and Facu Regalia both finish runner-up.

“Marvin is a fast and intelligent driver that harmoniously complements the trio of ART Grand Prix GP3 drivers”, said ART boss Frederic Vasseur. “His record is already very rich and the ambition of ART Grand Prix is to accompany him throughout this first season so that all his talent will shine through as effectively in GP3 as it did in previous formulas where he was champion the last two years.”