The Macau Grand Prix always attracts the top competitors from the different Formula 3 championships, but the appeal of the event is such that next weekend’s 30th running of the F3 race will feature an impressive grid made up of drivers from various categories, and can rightfully be labelled as the world final for junior racing.

Heading that field is Daniel Juncadella, the slightly-surprise victor of the 2011 race who has since won the Masters of F3 at Zandvoort, the F3 Euro Series and the concurrent FIA European F3 Championship. To succeed Edoardo Mortara and become the second two-time, back-to-back winner in Macau would cap off a stunning 12 months in terms of boosting his CV, and really give his career some added momentum. There’s little doubt the Spaniard arrives as the pre-race favourite, but despite his successes in 2012, his driving hasn’t always lived up to expectations this year.

One of Juncadella’s biggest challenges could come from within the Prema Powerteam. Ferrari Driver Academy ace Raffaele Marciello has pedigree on street tracks after his dominant performance at the Pau Grand Prix earlier in the year, and although his season tailed off in the second half, his clear-to-see talent could make the difference around the notoriously tricky Macau course. Prema’s lineup for the race is completed by Sven Muller, who’s had a promising rookie campaign with the outfit in the Euro Series, and Hannes van Asseldonk. The Dutchman was an unexpected fifth on his Macau debut in 2011, and although his British F3 season was a disappointment, he has previous with Prema after winning races for them in Formula Abarth.

While Prema is the team to beat in Europe at the moment, Carlin remain the powerhouse in Britain having now won the last five titles. They’ve used their reputation and presence in multiple categories to accumulate an eye-watering sextet of drivers for Macau that contributes significantly to the total amount of talent on the grid. After winning last year’s British F3 title and coming second at Macau, Felipe Nasr returns to the squad following a promising learning year in GP2. The chances of him repeating his 2011 result (or going one better) will depend on his ability to re-adapt to F3. 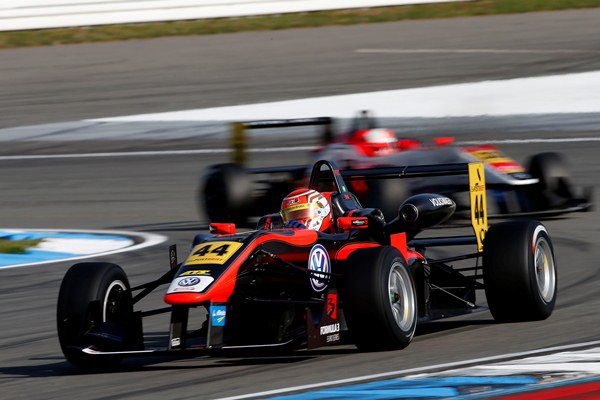 Nasr made a low-key return to F3 at the Euro Series finale at Hockenheim (Photo: F3 Euro Series)

GP3 runner-up Daniel Abt will be racing for Carlin for the first time, but has previous at Macau having led on his debut in 2010 before crashing out. One of Abt’s rivals in GP3, Antonio Felix da Costa is currently the hottest thing in junior racing and knows Carlin well, but again his competitiveness will hinge on whether he can get back up to speed with F3. It didn’t take him long to get on the pace in Formula Renault 3.5 though, did it? Fellow Red Bull Junior Carlos Sainz Jr hasn’t had the best of years, but is as quick as anyone on his day and could go well if he can keep out of trouble. William Buller has been a race-winner for Carlin in the Euro Series this year and has done the Macau F3 race twice before, while in 2009 he won the Formula BMW race there, just as Sainz did the year after. Finally, despite being the new British F3 champion, Jack Harvey will be the only one of Carlin’s drivers not to have raced at Macau before.

Carlin’s British rivals Fortec Motorsport field a four-car lineup, consisting of surprise package Felix Serralles, fellow rookie Alex Lynn, Brazil’s Pipo Derani and Harry Tincknell, who switches back to his 2011 team after spending this year with Carlin. In addition to Harvey and Serralles, the third man in this year’s British F3 title fight Jazeman Jaafar will be one to watch as he lines up with Japanese outfit TOM’S, winners in 2007 and 2008 as well as three times in the 1990s. His teammate is Yuichi Nakayama, runner-up in Japanese F3 and off the back of a five-race winning streak. 18-year-old Ryo Hirakawa, who beat Nakayama to the Japanese title, will be present with the RSS team while third-placed Hideki Yamauchi completes the Japanese contingent driving for B-Max Engineering.

Along with the European, British and Japanese champions, German champion Jimmy Eriksson goes to Macau driving for Double R alongside Lotus protege and Formula Renault 3.5 racer Kevin Korjus. Euro Series squad Mucke Motorsport brings its regular drivers Felix Rosenqvist and Pascal Wehrlein as well as Mitchell Gilbert who will graduate from German F3 with the team next year. There are two more German F3 drivers in the form of Lucas Auer and Dennis van de Laar with Van Amersfoort Racing, while Tom Blomqvist lines up with Eurointernational having won multiple German F3 races for the team this year as well as doing the Euro Series with ma-con. Alexander Sims will drive T-Sport’s Nissan-engined car with which he won at the Nurburgring Euro Series round, while the entry list is completed by Euro Series regulars Andrea Roda (Jo Zeller Racing), Luis Sa Silva (Angola Racing Team) and Lucas Wolf (URD Rennsport). 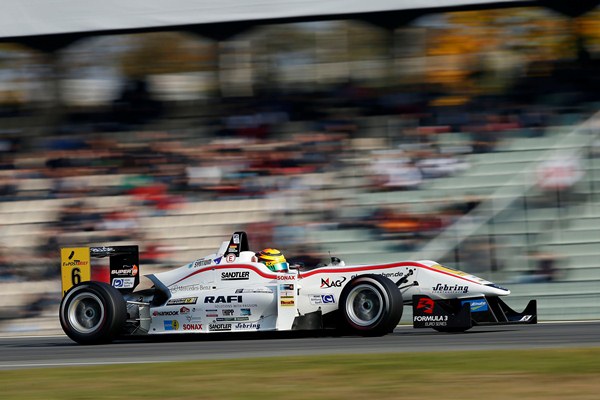 Wehrlein will hope to carry his strong form in 2012 into his Macau debut (Photo: F3 Euro Series)

The action begins on Thursday with practice at 10:55 local time (GMT +8) ahead of the first part of qualifying at 14:40. On Friday there’s another practice session at 11:00 with a second qualifying session at 14:35. The 10-lap qualifying race takes place at 14:00 on Saturday with the main 15-lap event at 15:30 on Sunday. Follow @PaddockScout on Twitter for updates throughout the event.

F1 has a race in the US, but it needs an American driver too