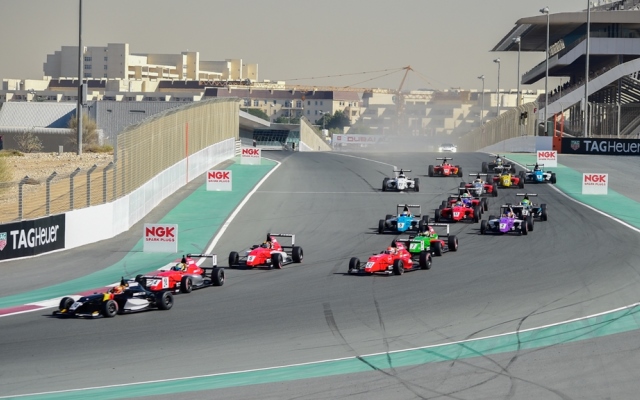 Alessio Picariello stretched his MRF Challenge winning streak to three in the opening race of the Dubai round, before Tatiana Calderon picked up the race two victory.

After winning both of the races in Bahrain on his series debut last month, the 2013 ADAC Formel Masters champion began round three with pole position, three tenths ahead of Nikita Troitskiy.

In race one, Picariello didn’t have it as easy as in Bahrain, pushed hard by Troitskiy and points leader Pietro Fittipaldi.

Fittipaldi was able to put a potentially crucial move on Troitskiy in their title battle and finish second, just over a second behind Picariello.

Calderon charged from seventh on the grid to take fourth, while Tarun Reddy came from ninth to finish fifth ahead of British duo Max Fewtrell and Harrison Newey.

Giuliano Alesi was 10th on his debut behind Nerses Isaakyan and Dylan Young.

Recent single-seater debutant Fewtrell started race two on the reverse-grid pole but was beaten into the early lead by Reddy.

The race was soon red-flagged however to repair barrier damage after Alesi crashed, with Newey and Sean Walkinshaw also eliminated.

After the restart, Calderon caught Reddy and passed the Indian on the penultimate lap.

However, the race result was initially determined by aggregate times, which made Reddy the winner by about a quarter of a second.

There was a further twist later however when Reddy was deemed to have blocked second-placed finisher Troitskiy.

A 20-second penalty demoted him down the order and gave the win to Calderon, with Troitskiy – whose 2016 Formula Renault 2.0 deal with Fortec was announced earlier – and Fewtrell getting second and third.

Isaakyan and Fittipaldi rounded out the top five ahead of Young and ex-Formula 2 driver Jose Luis Abadin.

Picariello suffered a steering wheel issue that forced him to take the restart from the pits, and left him eighth in the final results.