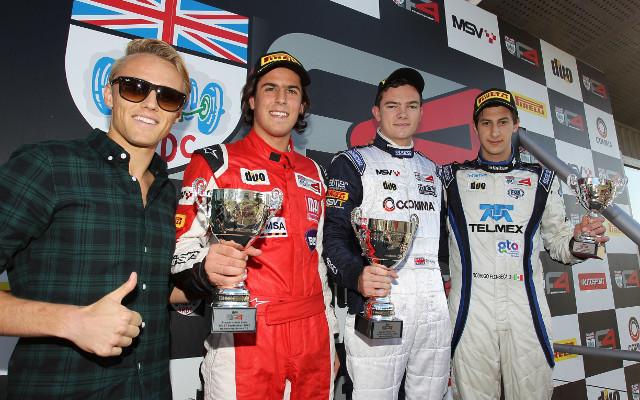 BRDC F4 champion Will Palmer added an 11th win of the season in the opening race of the final round at Brands Hatch, in command as Fernando Urrutia defended second place.

Palmer led from pole but was challenged by Urrutia around the outside at Paddock Hill bend at the start, only for Palmer to stay ahead on the inside for Druids.

The HHC Motorsport driver then gradually pulled away over the 25-lap distance on the Indy circuit, leading by nearly 10 seconds at the chequered flag.

Urrutia held onto second place for his maiden series podium, finishing half a second ahead of fellow Mexican Rodrigo Fonseca.

Ciaran Haggerty‘s attempts to pass Fonseca led to him losing out to Sisa Ngebulana, but the South African later ran wide through the gravel at Clearways, allowing Haggerty and Jordan Albert back past.

Jack Bartholomew held seventh early on under siege from Harrison Newey, but when the HHC driver tried to move pass at Druids he went wide and Jack Lang slipped through, with the privateer then going on to pass Bartholomew.

Newey did eventually get past to take eighth and with it, reverse-grid pole for race two. Bartholomew and Chris Mealin completed the top 10.

Newey’s hold on second place in the standings was strengthened by Tom Jackson only finishing 13th, with his margin now at 14 points.