After Jean-Eric Vergne had dominated the previous round of the Formula Renault 3.5 Series in Hungary to take the championship lead, it was now the turn of Carlin teammate Robert Wickens to demonstrate his ability with a double win that not only puts him back into the lead of the standings, but also gives him one hand on the title with two weekends to go.

After taking pole for Saturday’s race, the Virgin Racing reserve kept fellow North American Alexander Rossi at bay for the opening half of the race before the Fortec driver fell into the clutches of Daniel Ricciardo, continuing in FR3.5 despite bagging an F1 seat over the summer break. Once the Aussie got past he began to reel in Wickens but the Canadian claimed his third win of the year.

Rossi completed the podium in third, with Nathanael Berthon holding onto fourth under race-long pressure from Albert Costa. GP3 regular Nick Yelloly put in a fine debut performance to take sixth, only to later be disqualified for not having the required amount of fuel left in the car at the the end of the race.

Vergne was due to start the race from seventh on the grid, but his car wouldn’t get away for the warmup lap and he had to start from the pitlane. He worked his way through the field to finish 12th.

Wickens claimed pole again on Sunday morning, despite missing much of the qualifying session due to delays getting into the circuit. Vergne started alongside him on the front row, and pressured him in the early laps. However, a botched pitstop dropped him behind fellow Red Bull Junior Ricciardo who followed him into the pits. Rossi meanwhile took advantage of an early stop to vault from sixth to second. Wickens meanwhile controlled the race to secure his double victory.

Rossi came across the line in second but he and Fortec teammate Cesar Ramos were later disqualified for having wheel nuts that didn’t comply with the rules. Ricciardo inherited second, ahead of teammate Berthon who came out ahead of Vergne after a late stop.

In the championship standings, Wickens has now got a 34 point advantage over Vergne, with 25 available for a win. The two remaining rounds are at Paul Ricard on 17-18 September and in Catalunya on 8-9 October.

Drivers’ standings after 7 of 9 rounds: 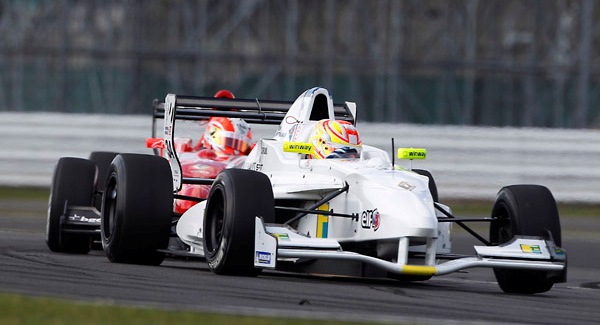 In Eurocup Formula Renault 2.0, Robin Frijns also claimed a double victory, extending his lead in the championship standings. His nearest rival Carlos Sainz Jr. had started from pole position, but Frijns found a way through for the lead early on. Sainz then dropped out of contention after receiving a drive-through penalty for getting a push from his mechanics at the start of the formation lap.

Frijns held onto his lead under pressure from Will Stevens, who in turn lost second place to Alex Riberas on the final lap of the race. Stoffel Vandoorne was fourth, ahead of Paul-Loup Chatin and Timmy Hansen.

UK championship leader Alex Lynn took pole position for the second race, with Frijns starting from third on the grid. Just like in the first race the Dutchman soon had the lead. He kept Lynn at bay for the remainder of the race to record his fourth win of the season, and become the first double winner in the Eurocup this year. Lynn and Chatin completed the podium, with Vandoorne fourth again. Red Bull duo Daniil Kvyat and Sainz were fifth and sixth, the Spaniard slipping back as far as ninth after a bad start from fourth on the grid.

Frijns’ double win and Sainz’s second poor weekend in succession has seen Frijns extend his points lead to 55 over Sainz, with four races remaining at Paul Ricard and Catalunya.

Drivers’ standings after 5 of 7 rounds: 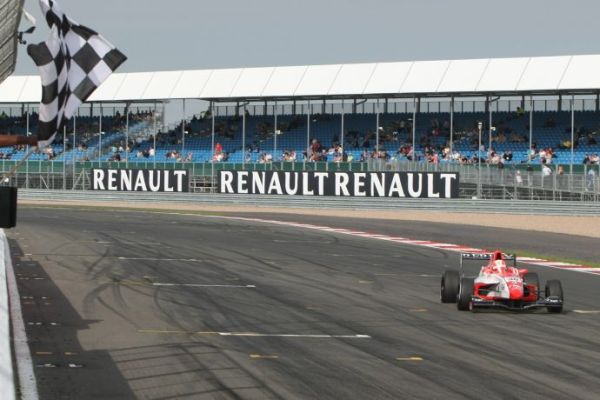 Lynn was dominant in the UK series and also gave the Eurocup frontrunners a run for their money. Photo: alexlynnracing.com

Formula Renault 2.0 UK made an appearance at the British round of the World Series, with that man Lynn dominating proceedings. He lead the first race from lights to flag, leading home Fortec teammate and Eurocup regular Felix Serralles, who like Lynn benefited from the extra track time of racing in both series over the weekend. Daniel Cammish came home in third position, his best result to date in Formula Renault. Tio Ellinas, Lynn’s nearest championship challenger, was fourth ahead of Oliver Rowland and Alice Powell.

Lynn was on pole again for the second race, converting it into a dominant tenth win of the season. Fortec filled the top four places, with Rowland second, Serralles third and Mitchell Gilbert fourth. Ellinas was the best of the rest in fifth with Cammish completing the top six.

Lynn’s double win extends his lead over Ellinas in the standings to 41 points, having seen his advantage cut to just 20 points after losing his win at Croft. The series will return to supporting the British Touring Car Championship for its three remaining rounds, at Rockingham, Brands Hatch and another round at Silverstone.

Drivers’ standings after 7 of 10 rounds:

PaddockScout Driver of the weekend: Robert Wickens – A close contest between the three double victors, but Wickens’ complete dominance of the premier category was sublime.