PaddockScout looks ahead to the World Series by Renault event this weekend at Silverstone, featuring plenty of young stars battling it out for top honours…

The World Series by Renault resumes after a seven-week summer break, taking to the track at Silverstone. Headlining the bill as always is Formula Renault 3.5, with its seventh race weekend of the season.

An emphatic double win last time out at the Hungaroring means Red Bull Junior Jean-Eric Vergne leads the way going into the weekend. His nearest rival is Carlin teammate and Virgin Racing reserve Robert Wickens, and the Canadian is just four points behind despite a quiet weekend in Hungary.

Some 38 points behind Wickens is Estonian rookie Kevin Korjus, who has already won three times this year. He is closely followed by American Alexander Rossi and Spaniard Albert Costa. Despite having got an F1 seat with HRT, Daniel Ricciardo is continuing in FR3.5, where he lies sixth overall after missing the first round of the season and struggling in Hungary. He will no doubt be amongst the contenders at Silverstone.

Three drivers will be looking to go well on home soil. Both Oli Webb and Daniel McKenzie have struggled so far in their rookie seasons in the category, while GP3 regular Nick Yelloly becomes Webb’s seventh teammate in seven rounds at Pons to make his debut in the series.

In Eurocup Formula Renault, Robin Frijns heads the standings. Carlos Sainz Jr. will hope to regain the series lead after a tough time in Hungary. He is the form man in category though, having scored a double win at Zandvoort in the North European Cup last weekend. Fellow Red Bull Junior Daniil Kvyat lies third, with Will Stevens fourth and hoping for a home victory.

Other drivers to keep an eye out for are FIA Institite Academy members Timmy Hansen, Stoffel Vandoorne and Paul-Loup Chatin, as well as 15-year-old Colombian Oscar Tunjo. 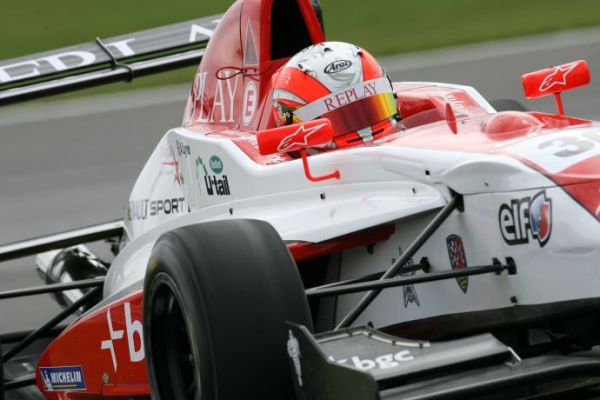 Alex Lynn will be going for victory in both the Eurocup and UK series at Silverstone. Photo: alexlynnracing.com

Also on the bill at Silverstone is Formula Renault 2.0 UK. Alex Lynn, who will also contest the Eurocup races, has a 20 point lead over Cypriot star Tio Ellinas, while Oliver Rowland and Jack Hawksworth fight it out for third place. Jordan King meanwhile has his sights set on a maiden win after being knocked out of the lead by Lynn two weeks ago at Snetterton.

PaddockScout makes its debut on the airwaves