The Formula Renault 3.5 title battle closes up, a new Vettel is crowned and two stars of 2011 wrap up their respective titles…

Robert Wickens headed to the penultimate round of the Formula Renault 3.5 Series at Paul Ricard with a 34 point lead over nearest rival and teammate Jean-Eric Vergne after his double win at Silverstone. On Saturday morning Vergne closed the gap by 10 points after having his Monza win reinstated. He then gained another seven points on Wickens with victory in the first race from pole position at his home track.

Albert Costa was second on the road but was later disqualified after his car was found to be underweight. This promoted Wickens to second place, with Brendon Hartley third. Jake Rosenzweig took fourth with Sergio Canamassas fifth. Daniel Ricciardo, making his final FR3.5 appearance with the Barcelona finale clashing with the Japanese GP, crossed the line ahead of Rosenweig but was penalised for not respecting track limits.

Vergne took pole again for Sunday’s race, but a slow pitstop dropped him to third behind Alexander Rossi and Ricciardo. Rossi went onto take his first win since the season opener at Aragon, while Ricciardo kept fellow Red Bull Junior Vergne at bay to take second place. Rosenzweig was fourth again, ahead of Nick Yelloly and Andre Negrao. Wickens finished all the way down in 19th after picking up a puncture.

That result allows Vergne to close up to just two points behind Wickens heading to the season finale at Barcelona on 8-9 October.

Drivers’ standings after 8 of 9 rounds:

Eurocup Formula Renault 2.0 also had its penultimate round of the season at the French track. Paul-Loup Chatin scored a home victory in the first race from pole position, his maiden win in the series. He kept the Red Bull duo of Daniil Kvyat and Carlos Sainz Jr at bay, with championship leader Robin Frijns finishing fourth. Will Stevens was fifth with Stoffel Vandoorne sixth.

Sainz took pole for the second race, but was passed during the race by Frijns. The Dutchman went on to take his fifth win of the year and with it wrapped up the title. Kvyat climbed from eighth to third to complete the podium, ahead of Norman Nato, Vandoorne and John Bryant Meisner.

With the title wrapped up ahead of the season finale, Sainz will hope he can hold onto second place from Kvyat on home soil at Barcelona.

Drivers’ standings after 6 of 7 rounds: 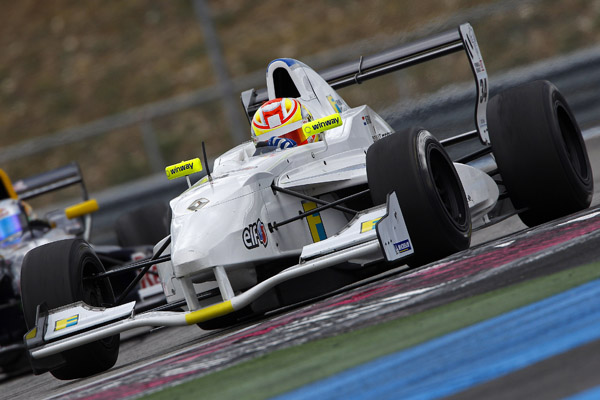 Also at Paul Ricard was Formula Renault Alps, for its penultimate round of the season. That man Chatin came into the weekend third in the standings, but like Alex Lynn at Silverstone he benefited from the extended running of contesting the Eurocup as well to dominate the race weekend with two pole positions and two wins to leap into the championship lead. The two men ahead of him arriving in France, Javier Tarancon and Yann Zimmer, were racing in the Eurocup as well, but failed to take advantage of the extra running.

In the first race Tarancon actually got ahead of Chatin at the start but the Frenchman retook the lead before the finish. Behind them, GP3 racer Vittorio Ghirelli was third ahead of Zimmer. In the second race Ghirelli finished second behind Chatin, with Tarancon third and Zimmer again fourth. Chatin holds a two point lead over Tech 1 teammate Tarancon ahead of the season finale at Spa on 1-2 October.

The inaugural Formula BMW Talent Cup had its grand final at Oschersleben at the weekend, with Stefan Wackerbauer winning the race ahead of fellow Germans Maximilian Gunther and Lukas Schreier. The 15-year-old Bavarian had won all but two of the heats during the year, and wins a fully-funded season by BMW in the German F3 Cup in 2012.

The penultimate rounds of the German F3 Cup took place at Assen in the Netherlands, where Richie Stanaway became champion before even turning a wheel after nearest rival Marco Sorensen failed to attend due to funding problems. Hannes van Asseldonk took pole for the first race on home soil, but Klaus Bachler won after staying out on slicks when rain came. Stanaway finished second, ahead of van Asseldonk. In the second race, Stanaway kept Markus Pommer at bay to win from pole, while Israeli Alon Day completed the podium after coming from 11th on the grid. The season finale takes place at Hockenheim on 1/2 October, with very little left to play for.

In ADAC Formel Masters at the same track, Emil Bernstorff closed the gap to championship leader Pascal Wehrlein from 67 points to 36 with a win and two second places. Sven Muller also closed up to 59 points behind Wehrlein with wins in races two and three. Wehrlein meanwhile could only manage a sixth, a fourth and a fifth. A maximum of 75 points are on offer at the season finale at Hockenheim.

David Fumanelli was the driver of the round in European F3 Open at Portimao, taking a win and a second place from the two races at the Portuguese track. Fahmi Ilyas and Juan Carlos Sistos completed the podium behind the Italian in the first race. Yann Cunha won the second race ahead of Fumanelli and Sam Dejonghe. Alex Fontana only managed 11th and fifth but remains the championship leader, 12 points ahead of Fabio Gamberini who scored two sixth place finishes and 23 ahead of Victor Correa who failed to score. Fumanelli is up to fourth overall, 30 points behind Fontana. Three rounds remain all in October, with Monza up next on 1/2 October.

In Italian F3 at Vallelunga, championship leader Sergio Campana won the first race ahead of polesitting Ferrari youngster Raffaele Marciello and American Michael Lewis. It was another Ferrari protege Brandon Maisano who won the second race ahead of Facundo Regalia and Victor Guerin. Campana has extended his lead to 14 points ahead of Maisano with Marciello and Maxime Jousse close behind with rounds at Mugello and Monza remaining.

Formula Renault UK had its eighth of ten rounds at Rockingham. Racing Steps Foundation-backed Oliver Rowland took his maiden victory from pole position in the first race ahead of Mitchell Gilbert and Tio Ellinas. Championship leader Lynn bounced back from finishing the first race in 10th and last place by taking pole for the second race and winning ahead of teammate Rowland and nearest rival Ellinas. Ellinas has cut Lynn’s lead from 41 to 36 points with rounds at Brands Hatch and Silverstone remaining.

Finally, at the penultimate round of the CIK FIA Karting World Championship at Sarno in Italy, McLaren protege Nyck de Vries won the first two races to extend his lead over Red Bull-backed Alexander Albon. Italian Flavio Camponeschi won the latter two races. The final round takes place at Suzuka on 12-13 November.

Driver of the weekend: Jean-Eric Vergne – Frenchman could have completely dominated his home FR3.5 weekend had it not been for a cross-threaded wheel nut delaying his pitstop in the second race. Closed the gap up to Wickens overall to set up an exciting season finale.