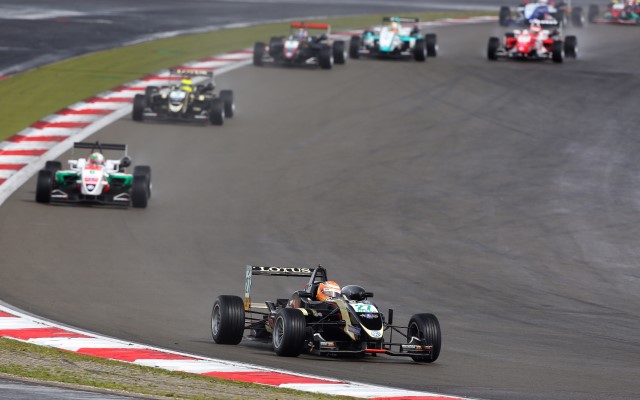 Markus Pommer further extended his lead in the German F3 Cup with two more wins at the Nurburgring – his eighth and ninth victories from 15 races. From a double pole position, the Motopark driver won both of the weekend’s feature races. In the reverse grid second race, he finished back in seventh, but over the weekend he still stretched his points advantage from 77 to 96.

Danish driver Nicolai Sylvest was the winner of race two, following a third in race one and preceding a fifth place in race three. Pommer’s closest rival and team-mate Nabil Jeffri was second in the opening two races and then third in the final encounter, while Sam MacLeod recovered from an eventful ninth-place result in race one to take third and then second in the remaining races.

After retiring following contact with MacLeod in the first race, Indy Dontje?recovered to take a pair of fourths and hold onto third place in the standings, eight points ahead of the Briton. 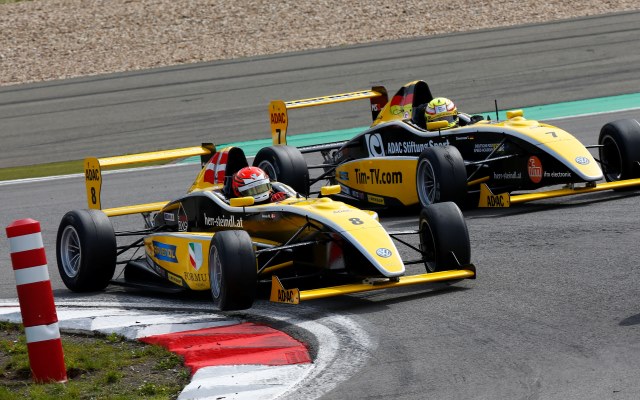 Mikkel Jensen took a step closer to wrapping up the ADAC Formel Masters crown with two more wins at the Nurburgring. The Danish driver didn’t have a completely smooth weekend – he was beaten away from pole in the first race but reclaimed the lead later on, while in race two he went off out of the lead at a restart in the wet, leaving him to finish seventh. In the reverse grid final race, he started second but lost ground in an incident before passing his team-mate Tim Zimmermann to take the win. He now has a 71-point lead with two rounds remaining, and will secure the title next time out if he can keep his lead above 65.

Marvin Dienst benefited from Jensen’s error to claim the win in race two, having finished second to the Dane in race one. He finished the weekend with a fourth place. His Mucke team-mate and Jensen’s closest rival Maximilian Gunther finished back in seventh in race one before taking two third-places.

After leading Jensen during the early stages, Joel Eriksson finished third in race one, and followed that up with a fourth and a seventh. Zimmermann took a fourth, a fifth and then second. Ralph Boschung slipped from third to fifth in the standings behind Dienst and Zimmermann, after starting his weekend with a non-finish. He would finish second and fifth in the remaining races. 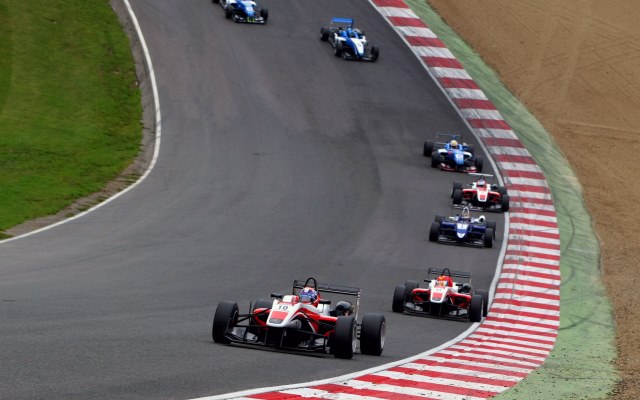 American teenager Santino Ferrucci made a one-off British F3 appearance for Fortec at Brands Hatch and claimed victory in the weekend’s two main races. He won the first race from pole position, before finishing third in the reverse grid race two. He then dominated race three after getting the jump on pole-sitter Martin Cao.

Cao took second place in race one, enough for him to take the championship lead back from team-mate Matt Rao when the Briton spun down from third to fourth. Cao then won race two after a flying start took him from third on the grid into the lead, past pole-sitter Rao. Cao began the final race from pole after beating Ferrucci to the fastest time in qualifying, but this time had no answer to his pace. Rao claimed second place in race two and then third in race three. With Ferrucci opting to not score points in order to not interfere with the Fortec drivers’ fight, Cao now leads by 15 points going into the final round at Donington.

Dan Wells benefited from Rao’s race one error to score a podium on his F3 debut with Double R, and followed that with two fourth places from a field that had grown back to seven for this event. 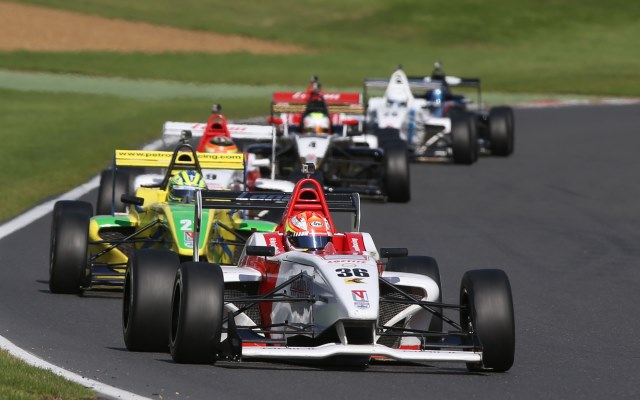 A win and two other podium finishes at Brands Hatch has moved Arjun Maini to within nine points of the championship lead with two rounds remaining. The Indian driver was third in the first race, second in race two after spinning while leading, and then claimed a lights-to-flag victory in race three. Those results vaulted him to second in the standings, just nine points off the lead.

Brazilian Gaetano di Mauro claimed pole position for the first race and duly scored his maiden victory. He was a first lap retirement from race two, but recovered to chase Maini home in race three. Chris Middlehurst was another first-time victor in race two, benefiting first from a multi-car collision ahead and then Maini’s spin. The MGR man was fifth and seventh in the other two races.

Championship leader George Russell crashed in qualifying, but recovered to tenth in race one from the back of the grid. He progressed further to third in race two before ending the weekend with a fifth. Raoul Hyman closed to just one point behind his rival with fourth in race one and took another fourth in race two, but then finished back in 14th in race three, leaving him 13 points back in the title fight.

Formula Renault 2.0 NEC: Barnicoat back ahead in title fight 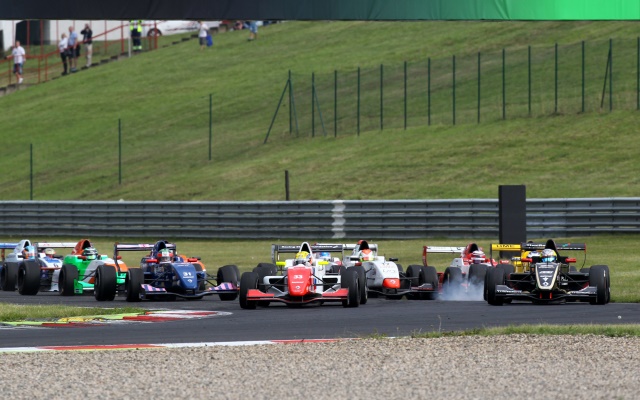 Ben Barnicoat reclaimed the lead of the Formula Renault 2.0 NEC standings with one round remaining after taking his second win of the year at Most. The Racing Steps Foundation rookie won the first race of the weekend after beating pole-sitter Alex Albon off the line. He was only seventh in race two, but that was enough for him to take a 12 point lead into the final round.

After finishing second to Barnicoat in race one, Albon claimed his first single-seater victory in the second race. Pole-sitter Raoul Owens finished second in that race, while Seb Morris was third in both encounters, moving the Briton up to fourth in the standings.

Barnicoat’s title rivals Louis Deletraz and Steijn Schothorst both claimed a best result of fourth from the weekend. Deletraz followed fourth in race one with tenth place in race two, while Schothorst was forced to retire from the first race with mechanical issues and is now 24 points adrift of Barnicoat. 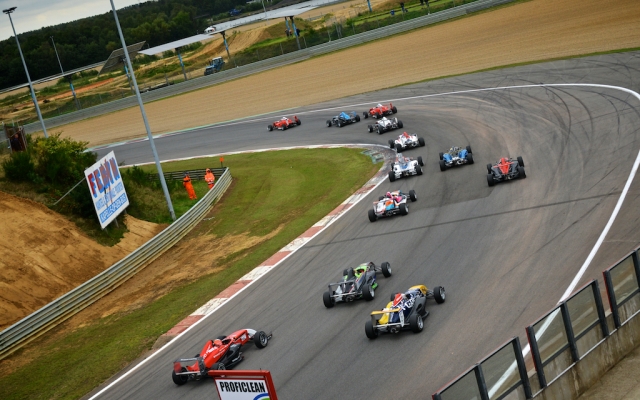 Anton De Pasquale continues to close on the Formula Renault 1.6 NEC title after taking his sixth win of the year at Zolder. The Australian finished outside of the top two for the first time all season with fourth in race one, but bounced back to claim victory in race two.

His rival Janneau Esmeijer closed the gap with second in race one, but after a third in race two, he is now 53 points adrift with two rounds left. 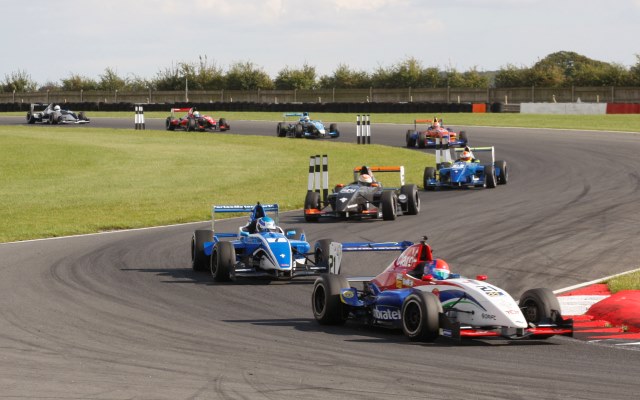 Pietro Fittipaldi stretched his winning run in Protyre Formula Renault to eight races with victories in the three races at Snetterton. The first was somewhat fortuitous, coming after front row men Alex Gill and Piers Hickin both crept at the start and were duly penalised. In race two he jumped past the pair and into the lead right at the start, and he led the third from pole position. His points lead has now grown from 36 to 70 with four races left.

Matteo Ferrer remains his MGR team-mate’s closest rival, despite not having the best of weekends. He was third in the opener, but only sixth and seventh in the two Sunday races. Fortec man Gill has closed to within six points after collecting two fourths and then a second in race three, just half a second behind Fittipaldi.

Although no longer eligible for points due to a licence issue, Tarun Reddy was a strong second, third and fourth in the three races. Hickin was sixth in race one after his penalty, a distant second to Fittipaldi in race two and then similarly far back in third in race three.

Sure, the quality in British F3 this year isn’t fantastic, but Ferrucci proved he’s on another level to them to rock up and claim his first two wins on the European single-seater scene. Come the final race of the weekend, the 16-year-old American had a dominant margin over the rest. 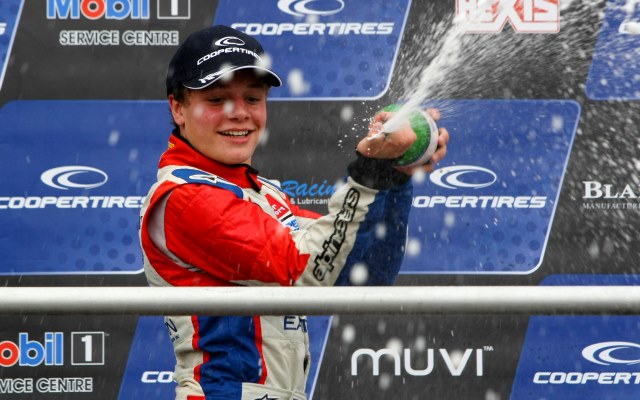