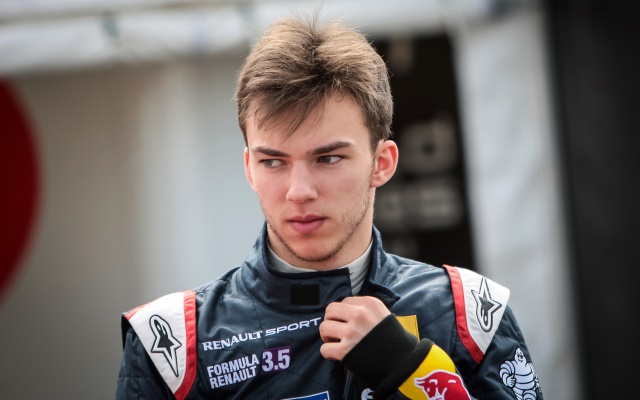 Pierre Gasly will contest the final three rounds of the GP2 season with the Caterham squad.

Gasly takes the seat previously held by Alexander Rossi and then Tom Dillmann, who stated that he would focus on his commitments in the Porsche Carrera Cup France this weekend rather than compete at Monza.

18-year-old Gasly has competed in Formula Renault 3.5 this year as a Red Bull Junior, after winning the Eurocup Formula Renault 2.0 title in 2013. He sits third in the standings with four podiums to his name.

?Of course I am really excited to be driving in GP2 with Caterham Racing,” said the Frenchman, who will become the first Red Bull Junior to race in GP2 since Sebastien Buemi in 2008.

“It is a new series for me and a great opportunity to race and gain experience in a different car and on Formula 1 circuits.

?For sure the GP2 car is going to be different to drive, it has more power than the Formula Renault 3.5 but has less aero.? I will have to adapt my driving style, but that is my job and I will try to do this as quickly as I can.

?I watch the GP2 races and understand that you have to manage tyre degradation as the races are longer than I am used to, but it also means that if you look after your tyres you can make more overtaking moves, which should be fun.

?I have been to the factory to meet the team and I am looking forward to driving in Monza this weekend and working hard to show what I can do in this car.?

Mia Sharizman, team principal of the Caterham GP2 squad which is still part of the group owned by Tony Fernandes despite the sale of the F1 team, said: ?Pierre is a young, but exceptionally talented driver and we are delighted to welcome him to our team.

?It is definitely not going to be an easy step but we will make the transition as smooth as possible for Pierre and our experienced engineering team will guide him through the process. Now we just have to wait and see how he will adapt this weekend.?