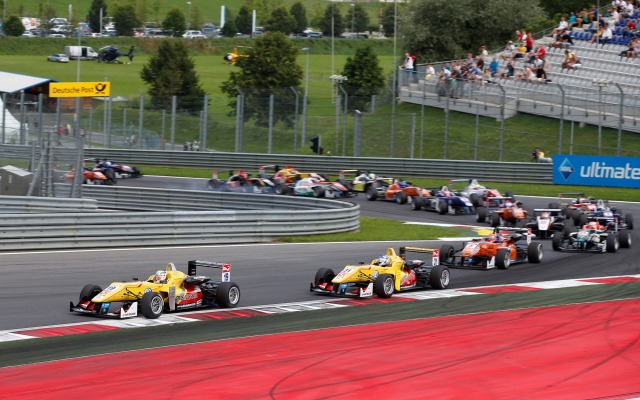 Tom Blomqvist, Antonio Fuoco and Antonio Giovinazzi took a win each in Spielberg on a dramatic and difficult weekend for Esteban Ocon?and Max Verstappen. The star pairing’s woes began when they clashed fighting for the lead of the first race.

Ocon could only recover to 13th, and then crashed out in race two. After starting race three with a grid penalty, he was then handed another penalty for not respecting yellow flags, leaving him 13th again. Given that he didn’t score any points, he was fortunate that his points lead over Verstappen was only eroded from 116 to 94.

Verstappen was originally third in race one but relegated to fifth for an off-track overtake. He was fourth in race two after starting back in seventh, and then finished fourth again in race three only to be pushed down to 12th for another illegal pass.

Jagonya Ayam-backed Carlin pair Blomqvist and Giovinazzi were on the pace from the get-go, and benefited from the Ocon-Verstappen clash to finish one-two in race one. Those positions were reversed in race three, with the Italian getting his first win. He should have won race two, but lost it because he didn’t stay close enough to the safety car during the last of three caution periods.

Fuoco’s move on Blomqvist for second early in the race was therefore enough to get his first win since the opening round at Silverstone, ahead of the Briton. Ferrari junior Fuoco was sixth in race one, but lost fourth late in race three when a hit from Verstappen forced him to pit. Jake Dennis made the podium in race two, and Lucas Auer finished third on home soil in races two and three. 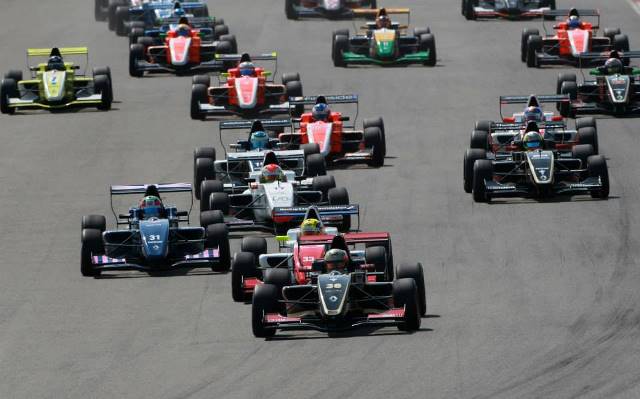 Louis Deletraz has moved to the top of a close Formula Renault 2.0 NEC title fight after the two races at Assen. A third place in race two – after an eighth in race two – was enough to move the Swiss driver ahead after his two chief rivals both suffered a non-finish during the weekend.

Ben Barnicoat had re-taken the points lead with second in race one and was leading race two when he suffered an engine failure. Erstwhile leader Steijn Schothorst was forced out of the first race by a lap-one incident and was only seventh in race two. The top three are covered by just four points with two weekends remaining. 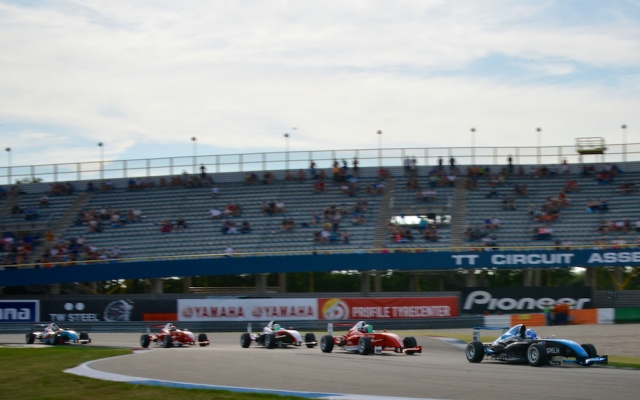 Anton De Pasquale extended his Formula Renault 1.6 NEC lead with a victory and a second place at Assen. The Australian led the opening race from start to finish, while in race two he was beaten off the line by first-time NEC winner Ralf Aron, who had been second in race one.

De Pasquale’s title rival Janneau Esmeijer could only finish fourth in the two races, meaning his deficit has now increased from 30 to 50 points with three events remaining. Aron’s strong weekend elevated him from eighth to third in the championship race, 34 behind Esmeijer.

In race one, Ferdinand Habsburg returned to the podium for the first time since the Zandvoort opener, while his Lechner team-mate Florian Janits took third position in race two.

Italian F4: Stroll and Maisano get a win each, and collide 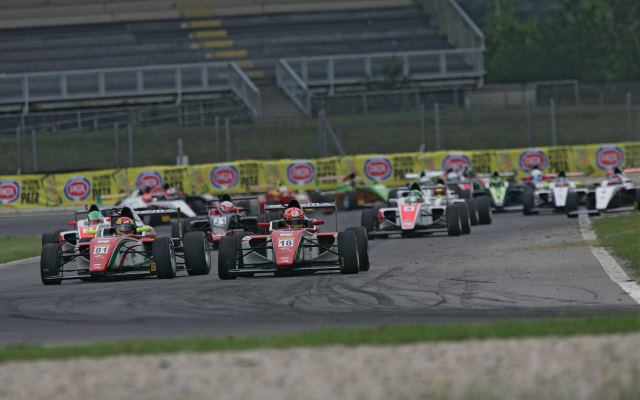 Italian F4 leading duo Lance Stroll and Brandon Maisano fought closely once again at Magione, with the Prema pair claiming a win each but also clashing in the second race of the weekend. They took a pole each for the two feature races, and Stroll led Maisano home in the first race and Maisano kept Stroll behind in the third race. But in race two they took each other out on lap four as they attempted to make progress from the reverse grid.

With maximum points in the two main races, Stroll still saw his points lead over championship rival?Andrea Russo increase from 84 to 87. Russo was seventh, second and fourth in the three races. Leonardo Pulcini completed the podium behind the Prema two in the main races, and was seventh in the other.

His Euronova team-mate Andrea Fontana claimed victory in the reverse grid encounter from pole, after coming tenth in race one. He was sixth in race three. Mattia Drudi scored a trio of fourth places, finishing behind debutant Matteo Desideri in race two. 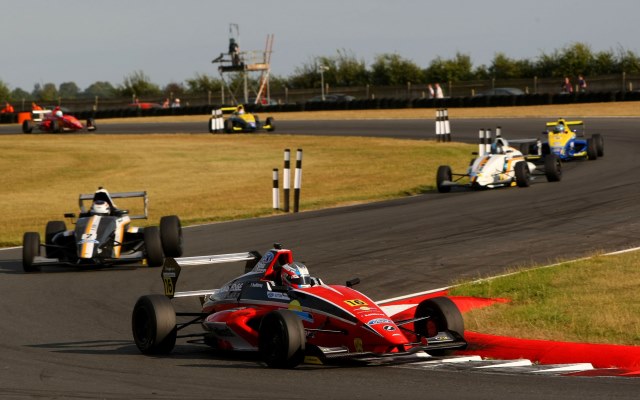 Ashley Sutton continued his recent rise to prominence in Formula Ford with two wins at Snetterton. He could only manage third in an adventurous first race, but in race two he claimed an early lead and ran away into the distance, while in race three he led from pole position to chequered flag.

Harrison Scott didn’t win a race, but a second, a third and a fourth were enough to extend his championship lead over nearest rival Jayde Kruger from nine to 14 points. Kruger began race one from pole but, after losing the lead on lap one after a clash with Sutton, later fell back to sixth with car issues. He was fourth in race two and second in race three.

Kruger’s JTR team-mate Max Marshall benefited from the contact in front of him to claim his first win in race one, following that with a fifth and a third. He’s moved up from fifth to third in the standings after disappointing weekends for Radical pairing?Juan Rosso and?James Abbott. Ricky Collard scored his best result yet with a comfortable second place behind Sutton in race two.

It was far from a perfect weekend for the Italian – his safety car error that took away the race two win made sure of that. But he put a difficult first half of the season behind him to be right on the pace all weekend, beat his rivals to a double pole on Sunday and then moved on from the disappointment of race two to take his maiden victory. Hopefully he can keep it up for the rest of the campaign.