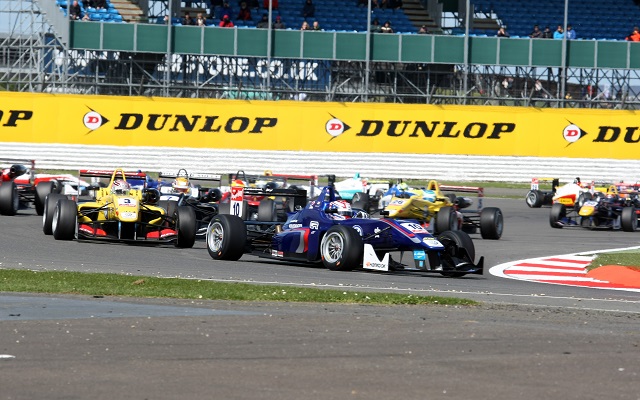 The opening round of the FIA F3 European Championship at Silverstone saw three different race-winners from the 35-car field, but it was another driver Antonio Giovinazzi who took the points lead after three podiums.

Veteran Felix Rosenqvist made a good start with new team Prema by initially taking a hat-trick of poles, but lost the latter two to a technical infringement. He took victory in race one and finished seventh and 12th from the back in races two and three.

George Russell and Charles Leclerc impressed on their F3 debuts, and won races two and three respectively. The pair clashed at a safety car start in race one before recovering to finish eighth and 12th. Leclerc started the weekend’s remaining races from pole but was beaten in race two by Russell. The Monegasque won race three, while Russell finished back in fifth.

Giovinazzi was second to Rosenqvist in race one, third behind the two rookies in race two, and then chased Leclerc home in the finale, giving him an eight-point lead in the standings over Leclerc.

Jake Dennis was the remaining driver to feature on the podium, finishing third in races one and three, but suffered a penultimate corner collision in race two. Alex Albon was another impressive debutant with a fourth and two sixths. Peter Allen

Euroformula Open: Tereshchenko and Rovera win at first round 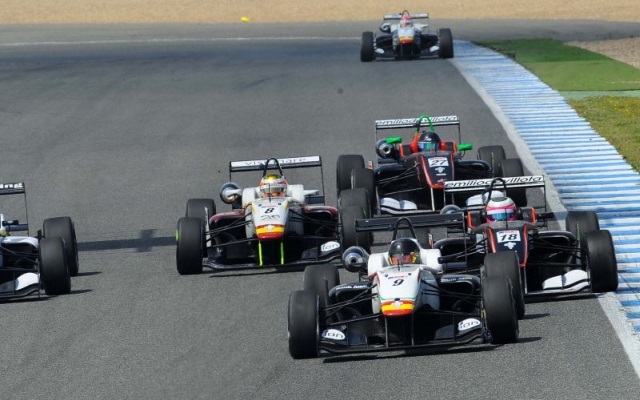 Several drivers shone in the season opener at Monza, suggesting we might have a season with more race winners than last year?s three. Konstantin Tereshchenko leaves Spain?with the championship lead but with six different podium finishers, it’s anyone’s game at this point.

On Saturday, Yarin Stern took a narrow pole ahead of newcomer Vitor Baptista but drivers?had to face damp conditions during the season opener, resulting in a chaotic race with six retirements. While Stern?s race ended prematurely due to a broken suspension, DAV’s last minute signing?Alessio Rovera mastered changeable conditions to claim an impressive win from 13th?on the grid. Baptista survived the carnage in second and Tanart Sathienthirakul took third.

Dry conditions welcomed the field on day two which proved to be a much calmer day. Tereshchenko converted a confident pole into a victory as Yu Kanamaru and Stern completed the podium after the top three dominated the race. Gruz David 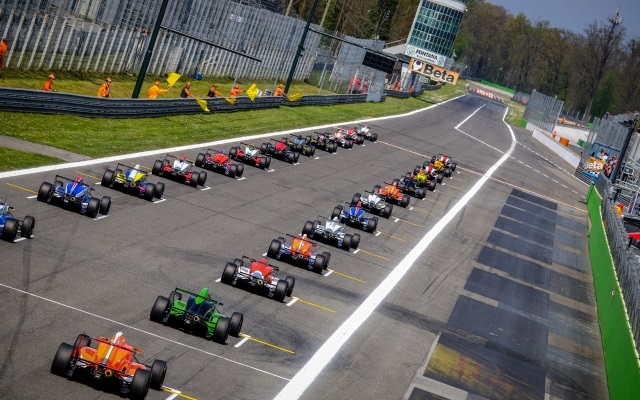 Last year?s runner-up Louis Deletraz confirmed he will not be content with anything but the title this year, having been the pace-setter at Monza. Although he claimed a confident win in the second race, his race one chances had been ruined when he received a drive-through penalty for not respecting his grid position.

As a result, Ukyo Sasahara was victorious in the season opener and, with a second spot in race two, he is the championship leader after the first round.

Late Manor MP signing Ignazio D?Agosto and best newcomer Max Defourny inherited podium finishes in the first race after both Deletraz and Kevin Jorg hit problems. On Sunday, another rookie Valentin Hasse-Clot grabbed a well-earned third place as he had to defend it for the bigger part of the race.

Jorg was on pace all weekend but incidents in both races left him with a best finish of ninth. Gruz David 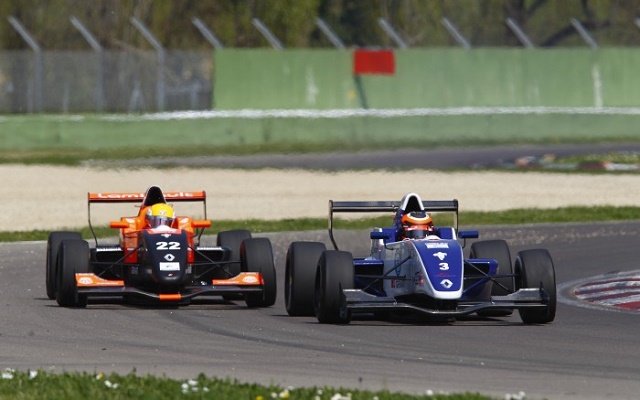 The Alps season opener at Imola has seen a Koiranen GP driver in his third year of Formula Renault 2.0 racing take the standings lead with 50 points.

If that rings a bell, that’s because the exact same thing happened last year and kickstarted a landslide title run by Nyck de Vries. But his successor Jack Aitken might not have it that easy.

For starters, it was actually Tech 1’s Anthoine Hubert who took the honours in race one, the 2013 French F4 champion celebrating a long-awaited maiden win in FR2.0. But guest entrant Hubert was ineligible for points and Aitken picked up 25 by finishing second, before promptly besting the Frenchman on Sunday.

Still, there’s no reason to count out his main championship rivals. Stefan Riener took two solid finishes and sits a not-too-distant second. Another teammate Jake Hughes would’ve been much closer in the points if not for an off in the first race that handed Simon Gachet the final podium spot. Finally, Matevos Isaakyan‘s quiet showing was put down to an illness. Valentin Khorounzhiy 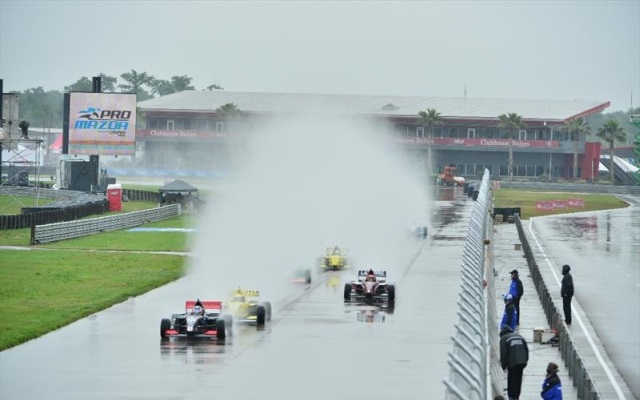 Santiago Urrutia took a maiden Pro Mazda victory at the rainy NOLA Motorsports Park to close in on championship leader Neil Alberico in the standings.

Organizers had a difficult weekend as race one, which was set to be held on Saturday, was postponed to Sunday morning and the second race cancelled due to massive rain hitting the track.

Andretti?s Weiron Tan took pole for the first race but Urrutia stole the lead from the Malaysian in the first lap to win for the first time in his third race in the category. Tan had to settle for second which was still vast improvement compared to his results from St. Petersburg.

Timothe Buret completed an all-rookie podium while Patricio O?Ward in fourth and Florian Latorre in fifth were also newcomers to the category.

Having qualified ninth, the sole winner at St. Pete Alberico only managed a sixth place, ending a difficult weekend at NOLA. Gruz David

USF2000: Jamin closes in on Eidson in mixed conditions 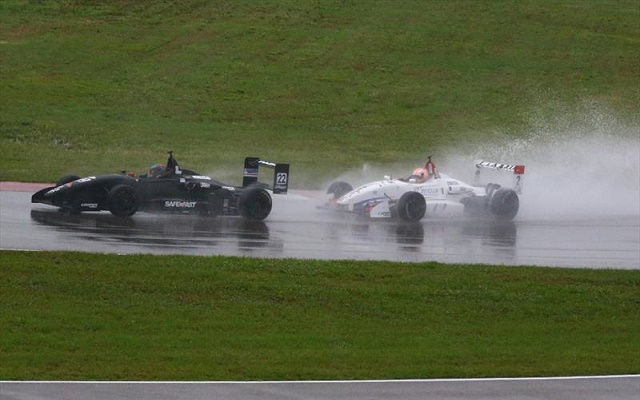 Winterfest champion Nico Jamin is now just seven points behind leader Jake Eidson, having finished ahead of the American in both NOLA races.

Either of the leading duo are yet to miss out on a podium finish in USF2000’s 2015 regular season.

Jamin drove to a straightfoward win from pole in the dry first race of the weekend, with Aaron Telitz in second and Eidson in third.

Telitz led the pack to green on a very wet track in race two, but went off after being passed for the lead by Victor Franzoni. Jamin came close to taking the win off the Brazilian, but had to do with second, as Eidson took another third.

The start of the season leaves little doubt that the title fight will come down to the four aforementioned names, who currently constitute the class of the field. Valentin Khorounzhiy

Leclerc and Russell might have started their weekend with a needless coming together, but it would be wrong to pick out anybody else (or choose between them, even though Leclerc scored better). They proved that their pre-season pace was genuine, and claimed a race win each from their debut weekends. They’ll now want to do that on a consistent basis this year, but they do look the real deal. 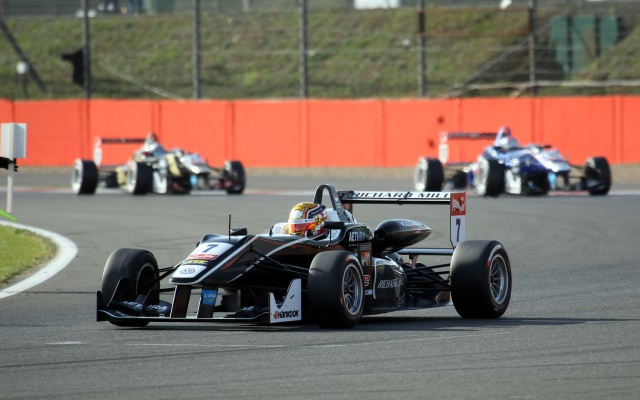