Home Featured PaddockScout Roundup: All the winners from a busy weekend
Roundups

After Davide Valsecchi‘s domination in Bahrain one week earlier, it was slightly suprising to see Giedo van der Garde pip him to pole in qualifying for the standalone event at the same Sakhir circuit. The Caterham man kept the lead at the start of the feature race too, but suffered tyre degredation early on and was forced to make way to Valsecchi, who claimed a third win from as many races. Fabio Leimer took second, with van der Garde in third. Luiz Razia was fourth ahead of Max Chilton, who’s rookie teammate Rio Haryanto impressed on his way to fifth. Felipe Nasr crossed the line seventh, but was later relegated to 11th after ignoring yellow flags. Marcus Ericsson inherited seventh, with Tom Dillmann in eighth.

Dillmann started the sprint race from pole on the reverse grid, and claimed victory despite intense pressure from Razia right until he took the checkered flag to claim a maiden win in the Frenchman’s rookie season. Valsecchi again climbed up the order, but this time he had to make do with third. Esteban Gutierrez took fourth ahead of Haryanto, Nasr, Ericsson and Leimer.

Valsecchi leads Razia by 24 points, with Gutierrez a further 29 behind after a difficult weekend for his Lotus GP team. The European leg of the season begins in Barcelona on 12/13 May. 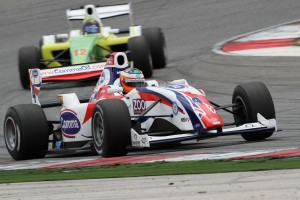 At the season opening races at Silverstone, Luciano Bacheta had twice made a pass for the lead on the penultimate lap to claim a fine double victory. He again won twice this weekend at Portimao (becoming the first man to win four consecutive races since the series’ launch in 2009), but had the tables turned on him by 15-year-old wonderkid Matheo Tuscher.

Bacheta claimed pole for Saturday’s race and built up a comfortable margin before Tuscher reeled him in, very nearly getting by in the final laps. Tuscher claimed pole for Sunday’s race with this sublime lap in wet conditions, but come the dry race he was passed around the outside at Turn 3 by a fast-starting Bacheta. Tuscher chased the Brit for the entire race, and just when he looked like he was going to get by he made a mistake on the penultimate lap, and freed Bacheta to win.

In Race 1 former GP2 racer Kevin Mirocha scored his first podium, crossing the line ahead of Markus Pommer, who’d had to work very hard to get by Chinese driver David Zhu who put in the surprise performance of the day to finish fifth, one place ahead of last year’s runner-up Christopher Zanella. Pommer finally converted his testing pace into a first podium finish on Sunday, ahead of Zanella, Dino Zamparelli and Daniel McKenzie.

Bacheta has scored 100 points from a possible 100, with Tuscher his nearest rival on 54, 12 ahead of Zanella. Round three takes place at the Nurburgring on 26/27 May. 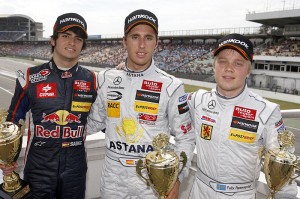 The men to beat in Hockenheim (Photo: F3euroseries.com)

The races at Hockenheim saw the start of the F3 Euro Series and the revived FIA European F3 Championship. Red Bull ace Carlos Sainz Jr was the man to beat in qualifying as he claimed pole for races one and three. The first of those saw fellow Spaniard and pre-season favourite Daniel Juncadella win out in a three-way battle early on between himself, Sainz and 2011 Masters winner Felix Rosenqvist, the trio crossing the line in that order. William Buller was fourth, ahead of Hannes van Asseldonk and Raffaele Marciello, while Tom Blomqvist took a fine seventh from towards the back of the field after he and the team only tested the car on Wednesday.

The race two with a reverse grid saw Ferrari protege Marciello come through from third to win on his debut weekend in the Euro Series aged 17. Van Asseldonk was second, Rosenqvist third, with Buller keeping Carlin teammate Sainz behind for fourth. Sven Muller was sixth, while Juncadella retired early on with damage.

Juncadella bounced back in race three, again getting the better of Sainz to win, with Rosenqvist again in third place. Alex Lynn took fourth, with Muller beating Buller to fifth.

Juncadella leads Sainz in the Euro Series standings by nine points, with Rosenqvist just a further three behind. Round two takes place at Brands Hatch on 19/20 May, while the Pau Grand Prix the week before will count towards the FIA series as well as the British championship. 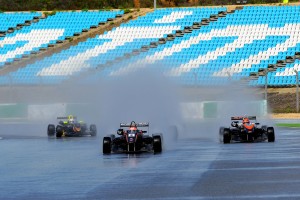 Not to be confused with the championship we were just talking about, the European F3 Open (formerly Spanish F3) kicked off at Portimao with the F2. Mexican Juan Carlos Sistos took pole for Saturday’s race in qualifying, and got his third season in the series off to the best start by converting that into victory. Canadian Gianmarco Raimondo snatched the lead from him for a while, but Sistos took it back. Swedish prospect Mans Grenhagen took second, with Belgian Sam Dejonghe in third, as Raimondo slipped back to fourth. Kevin Giovesi was the best of the Copa class for older cars in fifth, ahead of Facu Regalia.

Grenhagen took pole for Sunday’s race, and held the lead in trecherous conditions to win ahead of Raimondo and Niccolo Schiro. Regalia took fourth ahead of Giovesi and Matteo Beretta.

Grenhagen leads the standings by 15 points over Raimondo and 17 over Sistos, who could only finish ninth in the second race. Like F2, the next round takes place at the Nurburgring.

The first round of the FFSA-supported series took place at Ledenon, and race one was won by ex Toyota Racing Series driver Victor Sendin. Simon Tirman was second ahead of polesitter Alexandre Baron, with Joffrey de Narda, Darius Oskoui and Laurent Pellier completing the top six.

Two poles and two fastest laps gives Baron a four point advantage over Sendin even though they scored identical race results, with the pair already emerging as early contenders with third-placed Tirman 20 points away from Baron. Round two takes place in support of the aforementioned Pau Grand Prix.

PaddockScout Driver of the Weekend: Luciano Bacheta – Another supreme performance from the F2 driver, although this time he was pushed hard twice by Tuscher.