In an attempt to maintain a continental Formula 3 championship, the FIA has revived its European Championship that was last run in 1984. The season consists of ten meetings, including all eight rounds of the F3 Euro Series and two British championship rounds at Pau and Spa. An F1 test with Ferrari awaits for the champion.

Things begin at the Hockenheim this weekend, with a healthy grid of 19 cars. Leading the entry is Spain’s Daniel Juncadella, who stays in F3 for a third season. Last year he finished third in the Euro Series, and also won the prestigous Macau Grand Prix. He will hope to continue where fellow Spaniard Roberto Merhi left off last year, dominating the Euro Series driving for the same Prema Powerteam outfit.

Joing him at Prema are two drivers who raced for the team’s Italian series squad in 2011 – Michael Lewis and Raffaele Marciello. American driver Lewis finished runner-up and top rookie, resulting in an a Ferrari F1 test at Vallelunga. Marciello meanwhile is a member of the Ferrari Driver Academy, finished third in Italian F3 last year and only turned 17 last December. Both will be ones to watch, as will the fourth Prema driver, German Sven Muller who makes the big step up from the ADAC Formel Masters series where he finished third in the standings. 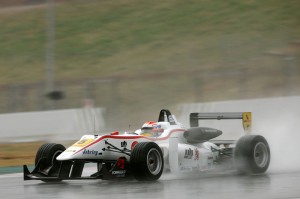 Juncadella’s biggest rival is likely to be Sweden’s Felix Rosenqvist, who sticks with Mucke Motorsport for his season year in the Euro Series and his third in F3 in total. By far his biggest acheivement so far was winning the Masters of F3 at Zandvoort last year, another prestigous date on the calendar. He is partnered at Mucke by German youngster Pascal Wehrlein, reigning champion in ADAC Formel Masters.

With Signature having departed the series having complained about a lack of quality drivers to pick from, Volkswagen have drafted in German outfit ma-con Motorsport to take the fight to the Mercedes-powered Prema and Mucke teams. They have something of an interesting driver pairing, two Brits, of Scandinavian descent, who were both racing in Germany last year. Tom Blomqvist, son of rally legend Stig, became the youngest ever Formula Renault UK champion in 2010 before a slightly disappointing German F3 campaign curtailed by injury. Emil Bernstorff meanwhile finished second in ADAC Formel Masters, sandwiched between Wehrlein and Muller. Both were McLaren Autosport BRDC Award winners, but both they and the team have an uphill struggle with no pre-season testing to speak of.

There are two more Volkswagen-powered drivers taking on the full campaign – Carlos Sainz Jr and William Buller of Carlin, the British superteam who make their return to the European F3 scene. Both Sainz and Buller are already engaged in other campaigns with Carlin this year; Red Bull Junior Sainz leads the British F3 standings after the opening two rounds, while Buller will race for the team in GP3. He already has two years of F3 under his belt in Britain, finishing fourth overall last year. Another of the team’s British series runners Harry Tincknell joins them for the Hockenheim round. Carlin’s success could come down to their ability to adapt when running on the Euro Series’ rubber of choice – Kumho.

Back to the Mercedes runners, and Swiss squad Jo Zeller Racing brings two cars. Sandro Zeller, the son of the team boss, won the little-known Austrian F3 Cup last year and also contested three Euro Series race weekends. Andrea Roda meanwhile was 12th in Italian F3 in 2011, his second year in the series. Previsouly he only amassed one podium from three years of Italian Formula Renault. Let’s move on swiftly…

There are three one-car entries, all from teams new to European F3. URD Rennsport bring German Lucas Wolf, who finished eighth in ADAC Formel Masters for the past two seasons. GU Racing line up with Munich-born Brit Philip Ellis, who impressively won the Formula Lista Junior title last year in his first year of racing. Meanwhile, Luis Sa Silva takes to the grid for the Angola Racing Team, in a car run by Prema, after finishing second in Formula Pilota China last year. 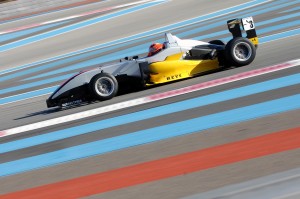 The similarly-named European F3 Open also starts its 2012 season this weekend, at Portimao in Portugal. It is essentially the Spanish championship, although this year only one of the eight rounds takes place in Spain. While not great on quality, Kevin Ceccon raced in the series in 2009-10 and last year’s champion and runner-up Alex Fontana and David Fumanelli have moved on to F2 and GP3 respectively.

One of the standout names on this year’s entry list is that of Facundo Regalia, driving for Campos Racing. The Argentine is also racing in Auto GP this year, and is partnered by Formula Renault graduate Denis Nagulin of Russia. Another of the favourites is Gianmarco Raimondo, the Canadian who raced in the F3 Euro Series last year. He is joined at RP Motorsport by 18-year-old Italian Niccolo Schiro, who finished fifth overall last year.

Schiro isn’t quite the highest-placed driver from 2011 that’s returning – that honour falls to Mexican Juan Carlos Sistos who was fourth last year. He races for Emilio de Villota’s team, as do Swede Mans Grenhagen and Colombian female racer Tatiana Calderon. Grenhagen boasts a strong karting CV, racing against the likes of Vainio, Sainz and Kvyat, but had a quiet first two years in cars in Lista Junior and Formula Abarth, before missing 2011. He did win one of the two ‘winter series’ races held at Paul Ricard in March. Calderon meanwhile switches from North American racing, where she finished sixth in Star Mazda and was twice a podium finisher.

Lebanese driver Noel Jammal has shown continued improvement in his three years to date in the series, finishing seventh last year with a race win. He also won at Paul Ricard last month. He’s joined at the Cedars team by Matteo Beretta, 11th last year and raced in Auto GP at Monza last month. British team West-Tec line up with second-year Belgian Sam Dejonghe and Spanish youngster Manuel Bejarano. The final runner in the main class with the new F312 Dallara chassis is Pierre Sancinena, who steps up after finishing fourth in French F4.

There are a few names who could be in the mix from the Copa class for the older F308 chassis. Aussie Jordan Oon has previously shown promise in Formula BMW Pacific where he finished third in 2010. Meanwhile, Italian DAV Racing duo Kevin Giovesi and Matteo Davenia will also be worth a look, Giovesi in particular having won twice in Italian F3 last year.

Another set of youngsters take to the track in Formula Renault 1.6 litre cars in the series run together with the French Federation’s Auto Sport Academy scheme, starting at the Ledenon circuit. Former graduates include Jean-Eric Vergne, 2007 champion, and Charles Pic, third in 2006. The majority of the 17 drivers of the 2012 crop appear to be rookies straight out of karting, although there’s one name that stands out. Victor Sendin got the jump on his rivals by contesting the first three rounds of the Toyota Racing Series in New Zealand earlier in the year, picking up some early results. He is mentored by former A1 Grand Prix champions and GP2 racers Alexandre Premat and Nicolas Lappierre.

Switzerland’s Darus Oskoui doesn’t turn 15 until next month, but already has a year of single-seaters under his belt thanks to the Formula BMW Talent Cup. Florian Latorre graduates as the Belgian KF3 champion, himself only turning 15 last Tuesday. Laurent Pellier won the French Federation’s ‘Kart Jeunes’ competition in 2011, while Simon Gachet has single-seater pedigree after winning the VdeV single-seater challenge last year and a competition by the name of Euroformula.

Another chance for the GP2 drivers to show what they can do around the Sakhir circuit, as they stay on in Bahrain for a stand-alone race weekend minus the F1 circus. Davide Valsecchi will look to have another dominant weekend, after claiming a fine double victory last weekend. Luiz Razia, Esteban Gutierrez and James Calado lead the chasing pack and were all on the podium last weekend.

Luciano Bacheta rose to prominance with a double victory at the F2 season opener in Silverstone, and he’ll look for a repeat performance at round two, which takes place together with European F3 Open at Portimao. Alex Fontana, Mihai Marinescu and Christopher Zanella will hope to close in after their podiums in Silverstone, while 15-year-old Matheo Tuscher will aim to impress again after his stunning pole position first time out. Auto GP racers Max Snegirev and Victor Guerin join the field this weekend.