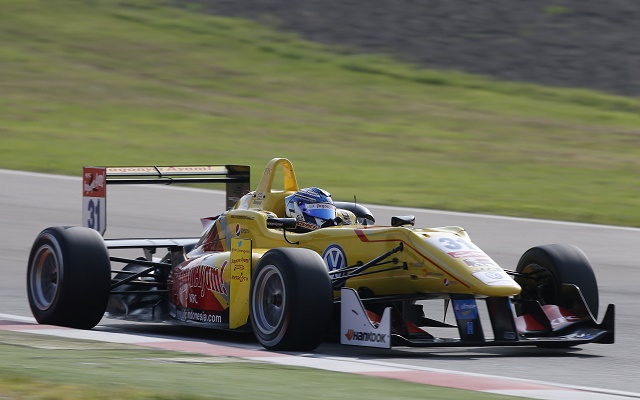 During the pre-season. Carlin announced that they would not contest the 2014 Formula Renault 3.5 championship ? a series they raced in since all the way back in 2003, when it was still World Series by Nissan.

The news, coupled with the fact that rumours had Carlin’s investors pushing the team to become more self-sustaining, were worrying and could be misconstrued as the beginning of the squad’s decline. Instead, however, putting an admittedly floundering FR3.5 outfit on the backburner allowed Carlin to easily remain a top-tier single-seater franchise.

Take, for instance, the stunning progress of their GP3 squad. Despite featuring in the series since its inception, Carlin were never real heavy-hitters, only coming somewhat close to the drivers’ title in 2012 when they fielded an extremely on-form Antonio Felix da Costa.

However, 2014 saw them land the signature of Red Bull’s new protege Alex Lynn and it proved a super move. Lynn might have lacked prior experience in the category, but his brutal form in pre-season testing showed that was no issue.

He kicked off the season in style with two feature race wins and would not finish outside of the points since round three at Silverstone, cruising to the championship.

While Angolan Luis Sa Silva brought in the budget, they also signed the perennially underfunded Emil Bernstorff, who got on very well with the car and finished fifth overall, above all expectations. The Briton ended up helping Carlin to the GP3 teams’ title, as they became the first squad to deny French powerhouse ART.

In contrast, their GP2 efforts were a slight disappointment and, to put that into perspective, they were team standings’ runner-ups yet again. F1 hopeful Felipe Nasr returned for a title shot, paired up with experienced racer Julian Leal. Nasr was a factor in the title fight, but could only manage third, while Leal dramatically slowed after lots of promise in the opening two rounds.

Still, teams’ runner-up by a healthy margin is nothing to scoff at, especially considering that they lost to DAMS ? a team that seemed frankly unbeatable in 2014.

And, finally, there was FIA F3, where Carlin brought in six cars and made for much of the depth on the grid. Carlin finally gave Tom Blomqvist and Antonio Giovinazzi the car to break through to the top, with the duo finishing second and sixth respectively. Meanwhile, Jordan King, Jake Dennis and Ed Jones all scored multiple podiums.

So, in the end, it was a year where Carlin won races in every series they took part in ? GP2, GP3, FIA F3 and even British F3, with class oozing from the British squad across the board.

2015 will be huge for them, with a move to Indy Lights serving as testing ground for a potential future breakthrough to IndyCar, a title challenge in the new MSA Formula series with karting superstar Lando Norris and a return to FR3.5.