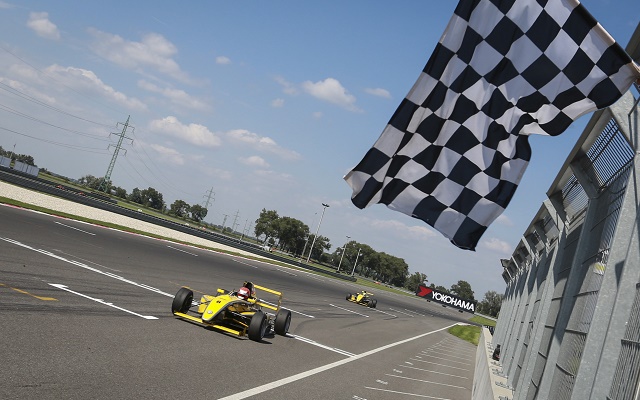 For the three years leading up to 2014, the ADAC Formel Masters titles ? both the drivers’ and teams’ ? were bouncing between Mucke Motorsport and Motopark Academy. And there was no big shock in that ? the two teams, after all, were established single-seater franchises and managed to secure the signatures of the best drivers.

Add to that the two squads’ efforts on the driver market ? with Mucke retaining Gunther and signing Dienst and Lotus taking on Boschung ? and we figured the two teams would exclusively contest the title.

We were wrong as, a season later, there’s a new sheriff in town in German entry-level formulae ? Austrian squad Neuhauser Racing.

To be fair, Neuhauser’s rise didn’t come out of nowhere as they have long established themselves as being a frontrunning Formel Masters squad, even nearly winning the 2012 title with Gustav Malja. But, certainly, they were never this dominant.

After a rather good 2013, Neuhauser slimmed their lineup to just two cars and went for the usual pairing of experience and youth. For the former role, they signed Mikkel Jensen ? a Danish driver who debuted in Formel Masters the year before and showed flashes of brilliance in an overall tough season for a struggling Motopark. The other seat was filled by promising karting graduate Tim Zimmermann.

Those observing the pre-season might have noticed that Neuhauser’s drivers were awful quick in testing and those were not glory runs. Jensen proved that at Oschersleben, taking pole for the opening race and dominating on Motopark’s home turf, with Zimmermann taking third.

Mucke’s star squad led the way over the next two rounds, but Jensen then dominated at Spielberg, giving the initiative back to the Austrian squad. Neuhauser’s duo then shared poles at Slovakia Ring and it was there that Zimmermann took his first win.

The sight of yellow Neuhauser machines storming away from the field became all too familiar in 2014. At Sachsenring, Jensen took his ninth win of the season by eight seconds to claim the title, before adding a tenth victory at Hockenheim. Meanwhile, a late-season streak of ten top-five finishes for Zimmermann allowed him to take third and helped Neuhauser comfortably wrap up the teams’ honours.

Neuhauser have already confirmed that they’ll be joining the new ADAC F4 series, but that might not be all ? they’re also rumored to have bought F3 cars with an eye on joining the FIA series in next year. Nothing has been announced, but, certainly, there aren’t many teams around that would be more worthy of a spot in the FIA F3 grid.