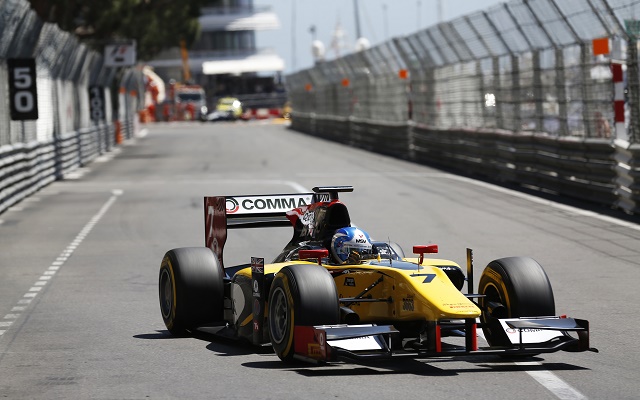 With GP2 drivers? champions in 2011 and 2012 and the Formula Renault 3.5 crown in 2013, this was the year where DAMS managed to take drivers to the titles in both of the top two junior single-seater series in the same year ? and topped the teams? standings in both for good measure.

As ever, their GP2 package had the pace to regularly qualify at the front, and title favourite Jolyon Palmer did the rest from there, aided by a car that was quick in both race and qualifying trim at every track, as well as by good strategy calls from the pitwall. DAMS were responsible for the one minor blip on Palmer?s route to the title when he was excluded from Monza qualifying, but the combination of car and driver was competitive enough for Palmer to end the weekend with a win.

The retained Stephane Richelmi fell back from eighth to ninth in the standings this year, but had the pace to claim a second pole in Barcelona and a sole win on his home streets of Monaco. He only fell one point short of the best ?number two? driver in the field, Raffaele Marciello, so did enough for DAMS to take the teams? crown in comfortable fashion.

In FR3.5, DAMS? success turning Kevin Magnussen into an F1-ready driver meant that Red Bull came to them with Carlos Sainz, who needed a strong season after bad years in F3 and GP3. Once again, the lead DAMS machine was in a class of its own some days, with Sainz claiming a series record seven wins ? all in relatively dominant style. DAMS couldn?t replicate the same consistency they enjoyed in GP2, but it didn?t matter in the end.

As in GP2, they opted for continuity in the second seat by keeping hold of Norman Nato. The Frenchman was again strangely off the pace much of the time, but the two days when he was right at the sharp end yielded race wins. In Monaco he completed a clean-sweep of DAMS wins across GP2 and FR3.5 that weekend, and at the Hungaroring he took points off the competition as Sainz struggled. His five points at the Jerez finale ? as Sainz non-scored ? were crucial, with DAMS just holding off rivals Fortec to win the teams? title by three points.

DAMS are clearly the go-team in both series, with a reputation not just for good engineering but also for getting the best out of their drivers. Thus, for 2015 they look set to have a French superteam in GP2 with Pierre Gasly and Esteban Ocon ? a prospect which will have rivals quaking in their boots after testing ? while Eurocup champion Nyck de Vries has been placed with the team for his step to FR3.5. Jazeman Jaafar is a candidate to join him, meaning DAMS could run drivers affiliated to Red Bull, Lotus, McLaren and Mercedes next year.