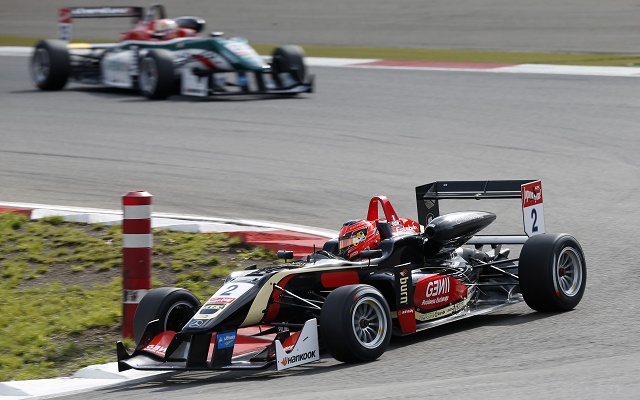 Over the last few years, the name ?Prema Powerteam? has become virtually synonymous with European F3, winning every drivers’ and teams’ title since 2011. They were especially good in 2013 in the rebranded FIA F3 series, locking out three spots in the top four.

But all three of their recent champions embarked on their title assault with prior F3 experience and, while Prema were looking to sign someone F3-savvy to spearhead their 2014 assault, they came up short. Champion Marciello moved on, third-placed Lynn received a surprise call-up to the Red Bull Junior Team and left for GP3, while Auer made a surprise switch to Mucke.

While Prema did sign reliable FIA F3 midfielders in Nicholas Latifi and Dennis van de Laar, their bets were hedged on two people with no previous experience in F3 ? Lotus junior Esteban Ocon and Ferrari protege Antonio Fuoco. The likes of Auer, Rosenqvist, King, Blomqvist returning to the series did not make their chances seem all that great.

But Prema delivered. After nine wins, including a particularly impressive Moscow hat-trick, Esteban Ocon became a European F3 champion with no prior F3 experience ? something that has not happened in all ten years of the F3 Euro Series. Fuoco’s season paled in comparison, but he was hardly disappointing, winning twice and finishing fifth as he played a big part in delivering yet another teams’ title for the Italian team.

Aside from F3, they also raced in Formula Renault 2.0, with a solid lineup of Dennis Olsen, Bruno Bonifacio and Hans Villemi. The experienced de Vries?Koiranen combo was unstoppable, so Prema settled for best of the rest, securing runner-up in both the drivers’ standings (Olsen) and the teams’ championship.

They also continued in FR2.0 Alps ? a series they swept with 14 victories in 2013, which largely contributed to us naming them ?Best Team of 2014?. Initially, they were set for more success, signing newly-crowned Toyota Racing Series champion Andrew Tang and karting prodigy George Russell. But, when Tang was conscripted by Singapore and Russell was poached by Koiranen, their chances of repeating 2013 were gone ? although Bonifacio did manage to prevent them from being winless with a guest victory in the finale.

Finally, they came into the newly-established Italian F4 as favorites and were expectedly class of the field. Canadian youngster Lance Stroll and his tutor Brandon Maisano won 13 out of the 21 races, the former becoming champion, while Takashi Kasai, despite struggling in the Florida Winter Series earlier in the year, actually managed to finish eighth overall.

For 2015, Prema will be favorites in FIA F3 once again, having already signed Jake Dennis and Stroll. They’re also expected to continue in Italian F4, but will leave FR2.0 – it appears second-best wasn’t good enough.