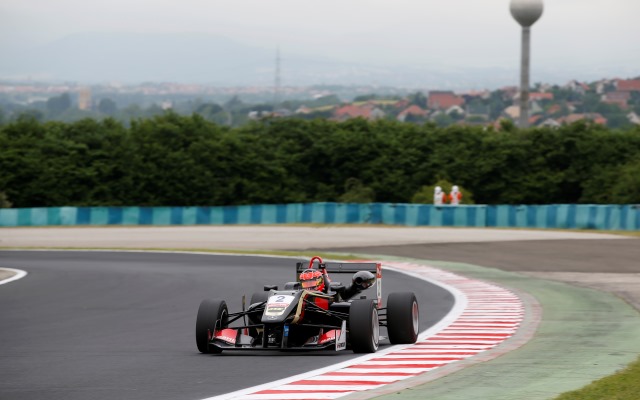 Esteban Ocon kept up his record of winning at every round of the FIA F3 European Championship with a dominant win in race two at the Hungaroring.

After starting on pole, the Lotus F1 junior built up an early advantage over the opposition and stretched that to seven seconds over the 21 lap race.

After four races without points, Ocon’s team-mate and fellow Formula Renault 2.0 graduate Antonio Fuoco returned to the podium in second place. The Ferrari protege had gapped the pursuing Lucas Auer at one stage, but although the Austrian fought back towards the end, Fuoco held on to the place by 0.4 seconds.

Jake Dennis made a fast start to climb from ninth to fourth at the beginning of the race but the stewards deemed his getaway to be too good and penalised him for a jump-start.

That promoted Felix Rosenqvist, who got close to his Mucke Motorsport team-mate Auer at one stage but had to settle for fourth. Max Verstappen was fifth until a drive-through penalty for exceeding track limits. That released Tom Blomqvist, but the race one winner ran out of time to catch Rosenqvist and saw the points gap to Ocon extend to 65 points.

His Jagonya Ayam with Carlin team-mate Antonio Giovinazzi followed, with Gustavo Menezes scoring his best result of the season in seventh. Felix Serralles was eighth ahead of Nicholas Latifi and John Bryant-Meisner.