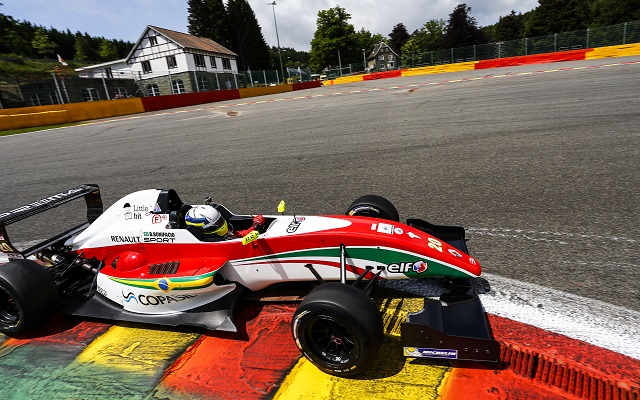 Prema Powerteam’s Bruno Bonifacio secured his first victory in the Eurocup Formula Renault series in race two of the second round at Spa-Francorchamps.

Bonifacio led a Prema 1-2 at the line, with Norwegian teammate Dennis Olsen finishing just 0.7s behind.

Poleman Nyck de Vries had a solid getaway off the line and led the field into turn one. A number of drivers closely followed the Dutchman out of Eau Rouge and into the Kemmel straight, but de Vries kept them at bay and held on to the lead.

With lots of drivers trying to line up behind the Dutchman into Les Combes, there was inevitable contact when Egor Orudzhev collided with front row starter Aurelien Panis, sending the Frenchman into a spin.

Bonifacio and Olsen managed to assume second and third respectively amidst the chaos and, on lap three, the Brazilian got a run on de Vries on the Kemmel straight and took the lead.

From that point on, Bonifacio managed to establish a relatively safe gap over de Vries, albeit the Dutchman stayed within a second off the lead for much of the race. At some point, the Koiranen man got close enough to start planning a move on Bonifacio, but the Brazilian was given a breather when Olsen suddenly ramped up the pressure in the fight for second.

On lap eight, Olsen managed to get a good run out of Eau Rouge and tried to pass the Dutchman on the right side of the track. De Vries attempted an aggressive block, even pushing Olsen on the grass, but the Norwegian didn’t ease off and was finally ahead into Les Combes.

During the final laps, de Vries dropped back from the Prema duo and came under pressure from Callan O’Keeffe, who had a couple of attempts on the Kemmel straight but ultimately couldn’t get through.

Ahead, Bonifacio comfortably brought the car home despite pressure from Olsen, as the duo wrapped up a Prema Powerteam 1-2. De Vries held on to second, while O’Keeffe kept teammate Levin Amweg at bay for fourth, scoring his first points in the series.

Anthoine Hubert was involved in a lengthy battle with Orudzhev for sixth and eventually prevailed. Guest driver Matevos Isaakyan picked up a superb seventh for JD Motorsport with Hans Villemi beating a struggling Orudzhev to eighth. Andrea Pizzitola was tenth while Matt Parry scored the final point.