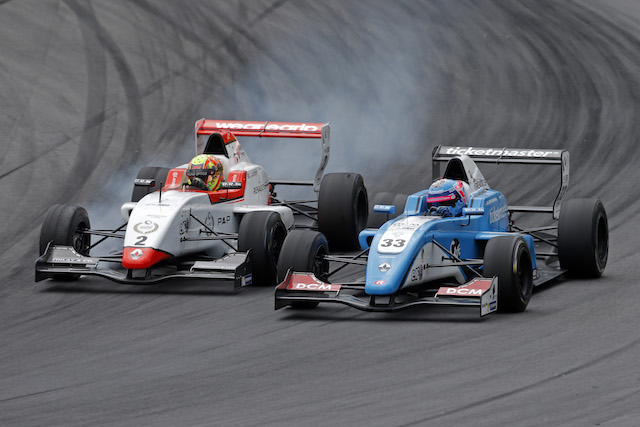 Lando Norris took victory in the first Eurocup Formula Renault race at Spielberg despite being passed by Max Defourny on four separate occasions in a thrilling duel.

Norris was able to open up a lead of 2.6 seconds from?pole on the first lap, but once Defourny cleared Jehan Daruvala the Belgian quickly cut the gap to Norris.

No sooner had he caught him than he dived down the inside at Turn 2 to take the lead, only for Norris to claim it back at Turn 5. Those two moves were then repeated on the following lap.

After one lap in which Norris took enough of a gap into Turn 2, Defourny made another bid for the lead at the same place, but Norris cut back to move ahead again into Turn 3.

Three?laps later, with two minutes left on the clock, Norris actually defended the inside line into Turn 2 for the first time. Defourny’s response was to stick to his rival’s rear and replicated?the Briton’s favourite?trick at Turn 5 to get ahead.

His lead stuck for exactly a lap, before Norris repaid the compliment and stole the lead for good on the penultimate tour with a gusty move.

Through all of this, Ferdinand Habsburg caught the leading pair and was able to sweep around the outside of Defourny a few corners later at Turn 1.

Defourny was able to reclaim a deserved second at Turn 3, however, forcing Habsburg to settle for third on home soil.

Daruvala spent most of the race driving in his mirrors, and eventually lost fourth to?Harrison Scott?a lap before the end.

Hugo de Sadeleer crossed the line just in front of Tech 1 team-mate?Dorian Boccolacci, but the latter was relegated to 10th by a 10-second penalty for exceeding track limits, putting him behind?Julien?Falchero,?Alexey Korneev and?Bruno Baptista.