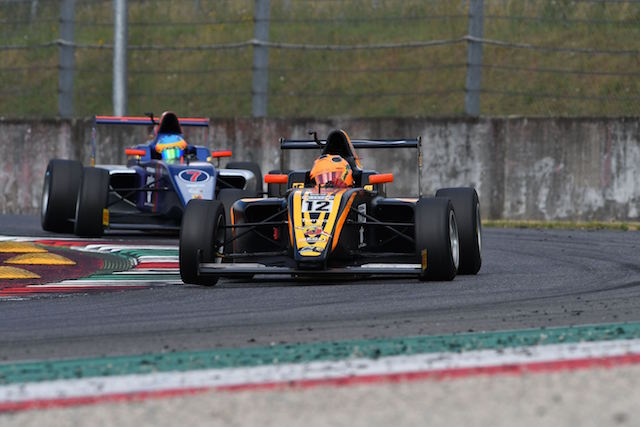 The race had to be rescheduled for later in the morning after the initial start led to a start-line pile-up, with Joao Vieira stalling and being collected by some of those further back.

As in race one, Correa led from pole position but came under attack from Schumacher at the first corner on lap two.

The pair made contact in the middle of the corner and then ran wide off track together. There was a further hit, with Schumacher – perhaps?with his suspension already broken by the first contact – tagging Correa into a spin.

Correa was able to rejoin down the order but Schumacher retired on the spot, causing a safety car.

The incident?handed the lead to 2015 Prema driver Raucci, and he led until the end of the race, which finished under a second safety car period.

Diego Bertonelli finished second, up from sixth on the grid, with Prema’s remaining driver Juri Vips completing the podium.

Raul Guzman finished fourth in front of?Devlin DeFrancesco, who charged from 12th on the grid.?Sebastian Fernandez?was sixth ahead of?Yifei Ye, while?Marcos Siebert slipped back to where he started in eighth.