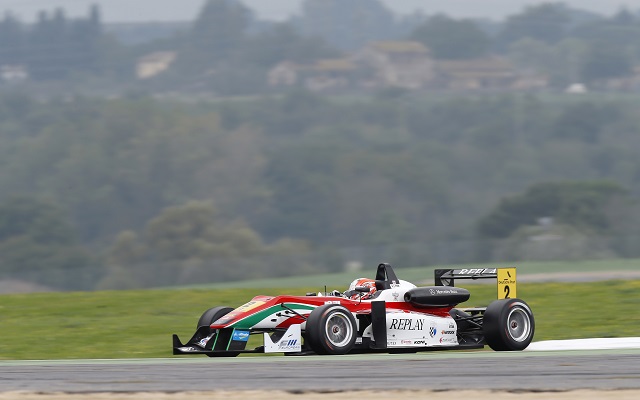 While European F3’s second Vallelunga outing would produce a rather incident-filled, busy race, none of that ended up mattering to Alex Lynn, who strolled from pole position to take a dominant win.

Lynn’s victory chances were given a significant boost when fellow front row starter and championship leader Raffaele Marciello retired on the grid with smoke coming out of his car.

The Briton, therefore, led from the line and subsequently held on to first through two subsequent restarts, eventually crossing the line way clear of the opposition.

T-Sport’s Alexander Sims could not keep up with his compatriot, but delivered a strong second-place finish, with Daniil Kvyat rounding out the top three.

Sven Muller took seventh, with Felix Rosenqvist fighting his way up to eighth from the back of the grid. John Bryant-Meisner scored his first top-ten, while Nicholas Latifi secured the final point.

The status quo, therefore, will be maintained into race three, as Rosenqvist has taken?only four points out of Marciello’s prior 32.5 points advantage.