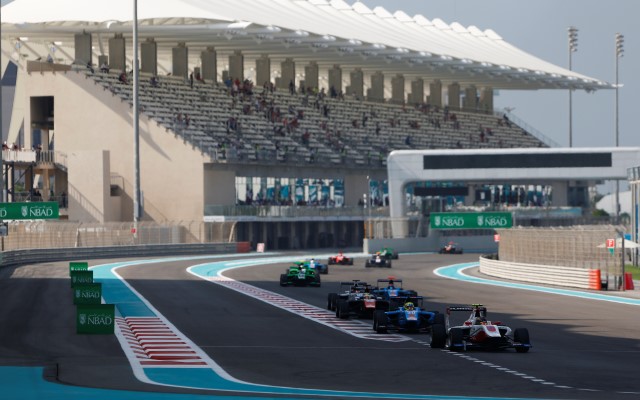 The entry list for the first day of the GP3 post-season test in Abu Dhabi has been realised, featuring Formula 3 frontrunners Charles Leclerc and Jake Dennis as well as Eurocup Formula Renault 2.0 champion Jack Aitken.

Top F3 rookie Leclerc has been rumoured with a move to GP3 next year and will drive on Wednesday with ART Grand Prix, the team part-owned by his manager Nicolas Todt.

Testing alongside Leclerc at ART will be Japanese F3 racer Nirei Fukuzumi, taking advantage of the tie-up between Honda and the French outfit, and Petronas-backed Malaysian F3 driver Nabil Jeffri.

Racing Steps Foundation-backed Dennis will test for Arden alongside BRDC Formula 4 champion Will Palmer ? who will also test with ART and DAMS this week ? and French F4 graduate Giuliano Alesi.

Aitken will run with his FR2.0 team Koiranen alongside his 2015 team-mate Jake Hughes. The British duo are weighing up GP3 and Formula 3.5 V8 for next season having already tested extensively in the latter.

They?re joined at Koiranen by another FR2.0 graduate Matevos Isaakyan, who contested the final two GP3 events of the season for the Finnish-run team.

Having run Luca Ghiotto to second this year, Trident will test existing GP3 drivers Antonio Fuoco and Matt Parry (who finished sixth and eighth in the 2015 standings for Carlin and Koiranen respectively) as well as another FR2.0 ace Kevin Jorg.

Status Grand Prix is named on the entry list but the team departing the series, its drivers are essentially trying for newcomers DAMS. F3 racers Santino Ferrucci and Tatiana Calderon will test on day one alongside Jenzer GP3 regular Ralph Boschung.

Jenzer will run three rookies: Euroformula Open drivers Leonardo Pulcini and Antoni Ptak and its own F4 racer Nico Rindlisbacher. Another of its F4 contingent Marcos Siebert is due to run later in the week.

Campos Racing took its first GP3 win in Sunday?s final race with Alex Palou but the Spaniard will test Audi?s DTM car on Wednesday. In his absence, Campos will test ex-FR2.0 racer Steijn Schothorst, Pedro Cardoso ? who is on course to win the South American F4 title this weekend ? and F3 driver Mahaveer Raghunathan.

Only 21 cars will be in action in the test with seven teams running three drivers each, but teams will be able to field a fourth car when the GP3/16 model is introduced next season.