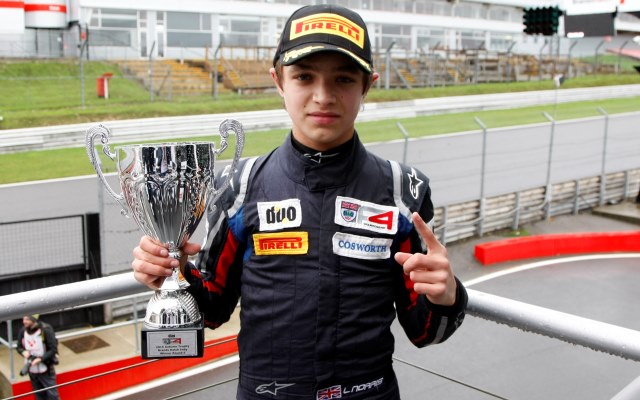 The 16-year-old will team up with top FR2.0 squad Josef Kaufmann Racing to take part in the Eurocup and NEC.

He will also remain within the Carlin setup to take part in six non-clashing BRDC F4 rounds as the team expands into the British series.

He’s been testing for Kaufmann’s team in recent weeks and won races on his BRDC F4 debut in the Autumn Trophy.

?I?m really excited to be working with Josef Kauffman Racing next year, but equally happy to be back with Carlin again after the brilliant season we?ve just had,” he said.

?We?ve done some testing with Josef Kaufmann which I really enjoyed and was always in the top three, so I?m looking forward to continuing with the team next season.

?I?m also really pleased to be back with Carlin and my engineer Stefan de Groot after winning the title with them.

?We?re hoping to be right up there again and competing for trophies on both fronts.?

With a Toyota Racing Series programme announced by the New Zealand series earlier, it means Norris could race on up to 25 weekends next year.

Manager Mark Berryman of ADD Motorsports explained why Norris has not stepped up to Formula 3 as might have been expected.

?Lando is still really young and was only 16 a few weeks ago ? many people forget that – so we felt there?s no rush,” he said.

?He?s smaller physically and we didn?t want to go into F3 at a disadvantage due to his strength.

?Instead, we?re looking forward to a season with the successful Josef Kaufman Racing where he can keep learning and strengthening in certain areas.

?But it also gives us the chance to keep our brilliant relationship going with Trevor Carlin and Stefan de Groot that served Lando so well this season.?

Carlin commented: ?We?re delighted that Lando stays with us for 2016 and that we have the opportunity to work with this exciting young driver again.

“Lando did a fantastic job in MSA Formula this year and we were very proud to help him take the title. The progress he made throughout the year, from a young karter to his first single-seater championship was incredible and we look forward to continuing that positive progress again in 2016.

“We are building a very strong BRDC F4 team and preparations are already very much underway. Despite not completing the full programme, we?re sure that Lando will put in some exciting performances next season.?