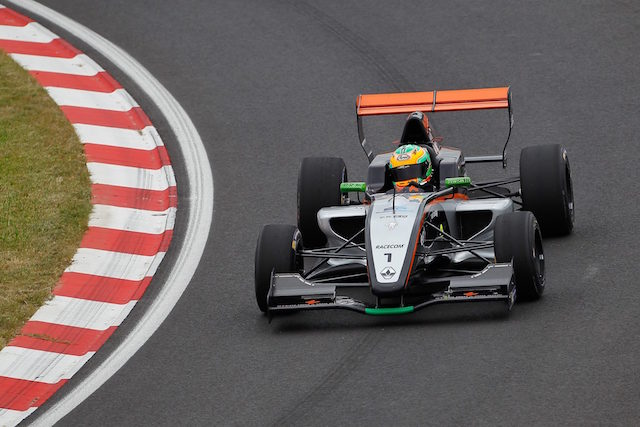 Jehan Daruvala?took the lead of the Formula Renault NEC standings with his first category win in race two at the Hungaroring, after team-mate?Lando Norris triumphed in the first.

Norris opened up a six-second lead in the first race prior to a safety car, after which he won by 2.4 seconds.

Vasily Romanov finished second after fellow Russian?Nikita Troitskiy was penalised for a jump start, with?Ferdinand Habsburg taking?third ahead of?Bartek Mirecki, who had never finished higher than 10th before.

With?Max Defourny?and?Dorian Boccolacci only 10th and 17th respectively after poor qualifying sessions – the former made?up 10 places but the latter was penalised for doing an extra reconnaissance lap to the grid – Norris went into the championship lead, but lost that again when he made a mistake while leading race two.

Fellow Josef Kaufmann Racing driver?Daruvala, 13th in race one after a spin, inherited the win, his first in Formula Renault, and with it the points advantage.

Robert Shwartzman and Habsburg joined him on the podium ahead of?Hugo de Sadeleer and Monaco Eurocup winner?Sacha Fenestraz, who were penalised in race one?for identical offences to Tech 1 team-mate Boccolacci.?Defourny and Boccolacci completed the top eight behind Mirecki.