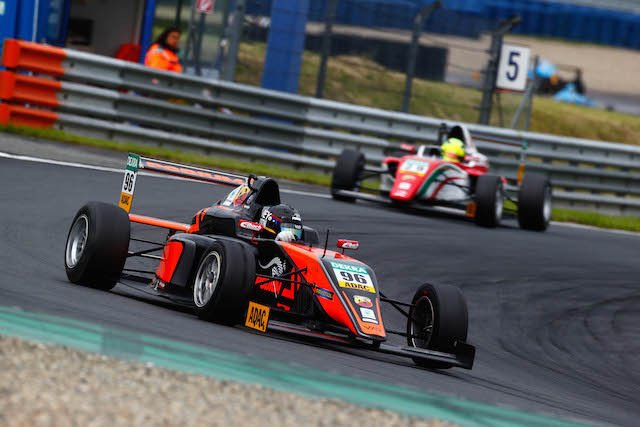 Joey Mawson took his fifth win of the?ADAC Formula 4 season in race two of round four at Oschersleben, before Kim-Luis Schramm broke his duck in race three.

Mawson led from start to finish in race two, which was the first this season to not be interrupted by a safety car.

The Australian was kept on his toes though by chief rival?Mick Schumacher, particularly in the second half of the race, with less than a second separating them at the line.

Thomas Preining held third throughout, but he was excluded post-race for not having enough fuel left in his Lecher Racing-run car – a scenario that is unlikely to have arisen had the safety car appeared.

Schramm had reverse grid pole position for the finale and capitalised on it to claim a maiden victory on his 82nd start in the ADAC single-seater category since 2013.

Leonard Hoogenboom was second throughout for his best result to-date, joined on the podium by?Juan Correa.

Jonathan?Aberdein?and?Preining were next, while Red Bull Junior?Richard Verschoor charged from 12th to sixth to complete?his debut weekend in the series.

Mawson and Schumacher both failed to score, the former retiring after early?contact and the latter handed a drive-through penalty for overtaking under a safety car.

The race had to be red flagged at one stage after a spin for?Oliver Soderstrom as the field bunched for a restart led to the safety car being kept out, but the extremely late call to do so caused further contact on the pit straight with Laaksonen being rear-ended by?Ortmann and Juri?Vips?going?off in avoidance.