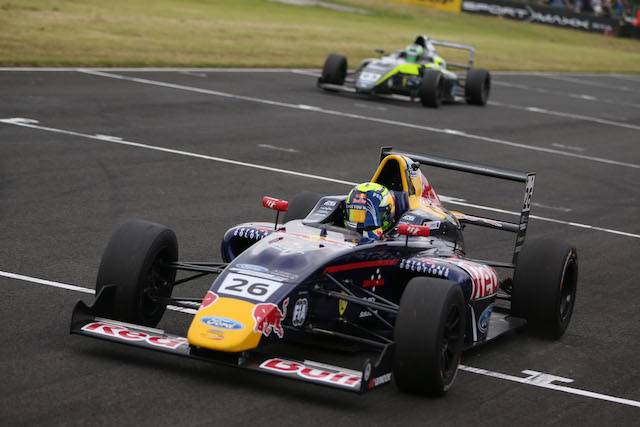 Luis Leeds and?Devlin DeFrancesco shared the British Formula 4 wins on Sunday at Croft, as Max Fewtrell gained?control of the title race going into the summer break.

That – and contact further down the order for Fortec team-mates?Alex Quinn and?Frank Bird – brought out the safety car, after which Leeds was able to briefly open a good margin over fellow Australian and race one winner?Zane Goddard, up from fifth on the reverse grid.

Goddard responded and kept the gap below seven tenths over the closing laps, but Leeds held on for his second win of the season.

Fewtrell lost out to Goddard at the start, but third was enough for him to regain the points lead from Carlin team-mate?Petru Florescu, who finished eighth from 15th on the grid following his race one retirement.

Race three took place in the wet, with DeFrancesco in control after passing Goddard around the outside on the first lap, finishing up 3.4 seconds clear.

Fewtrell took another podium, and with Florescu finishing where he started in ninth, now has a 20-point advantage in the standings at the halfway stage.

Racing Steps Foundation protege Quinn held fourth throughout, but the same couldn’t be said for his new team-mate?Caroline, who went?from 14th to sixth on the first lap and took fifth from?Fielding on the next.

However, he cut the chicane on the opening tour in the process, and was relegated to eighth post-race behind Fielding, Pull and Martins.