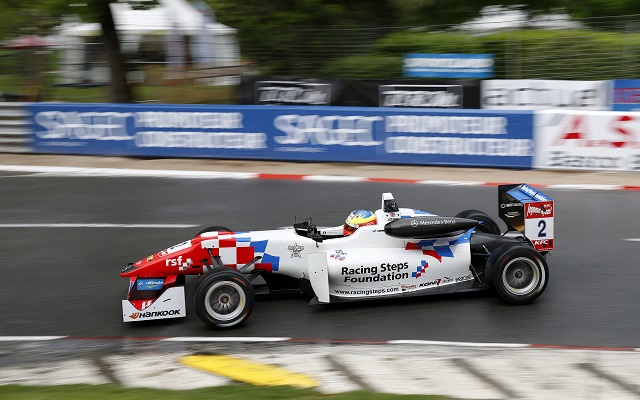 Jake Dennis came out on top again in the second qualifying session for the FIA F3 European Championship round in Pau, completing a hat-trick of pole positions for the weekend.

In a repeat of the earlier session in which Dennis took pole for race one, the British racer moved to the top of the times in the second group towards the end with a lap that was faster than the group A benchmark set by Charles Leclerc.

He then found a marginal improvement on the following lap and ensured that he ended the session with the quickest two times, securing pole for both race two and race three.

Leclerc didn’t have it all his own way in group A this time, but the Monegasque driver got ahead of Antonio Giovinazzi at a crucial point just before a red flag. The session was restarted, but another stoppage soon afterwards brought an early end and meant Leclerc couldn’t be toppled.

The first two rows of the grid for race two will be identical to race one, with Maximilian Gunther third and Giovinazzi fourth. For race three, Giovinazzi will move up onto the front row at Leclerc’s expense after setting a quicker second-best time.

Markus Pommer will be fifth in race two after going third in the second group, with Arjun Maini finishing in the same place in the first group.

Alessio Lorandi and Alex Albon will be on the row behind after finishing fourth in their groups, with Albon’s Signature team-mate Dorian Boccolacci – a double winner in Pau in French F4 last year – heading row five.

Tenth on the grid – an improvement of four spots on race one – will be last year’s Pau Grand Prix winner Felix Rosenqvist.

While the odd-side of the top ten (behind Dennis) will be the same for race three, the changes continue on the even side with Albon jumping ahead of Maini and Lance Stroll knocking his Prema team-mate Rosenqvist out of tenth.

A crash for Pietro Fittipaldi early in the second group brought out the red flags and caused him to fall to the bottom of the times, making him one of the two non-qualifiers along with Mahaveer Raghunathan.