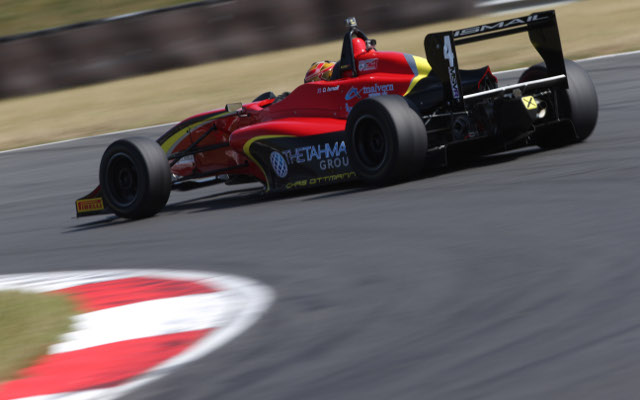 BRDC F4 driver Omar Ismail converted his maiden pole into a first victory in only the fourth race of his career at Snetterton.

Ismail had a good launch off the line, staying ahead, but 16-year-old could not shake off Will Palmer, who started second.

However, the championship leader was unable to get by Ismail and the duo was even caught up by Harrison Newey in the final laps.

Still, there was no drama in the end and the trio stood on the podium?in an unchanged order.

Michael O’Brien finished 24 seconds behind the leaders, having forced his way up to fourth from 11th after Ameya Vaidyanathan and Tom Jackson both hit trouble, the latter suffering a puncture.

Two drivers from the top five of the grid suffered early retirements in Jack Bartholomew and Fernando Urrutia. Chris Mealin was another driver unable to finish the race, having broken his steering wheel.

UPDATE: A 30-second penalty demotes Ngebulana from sixth to 15th. James Reveler gains a top-ten finish – his first of the season.