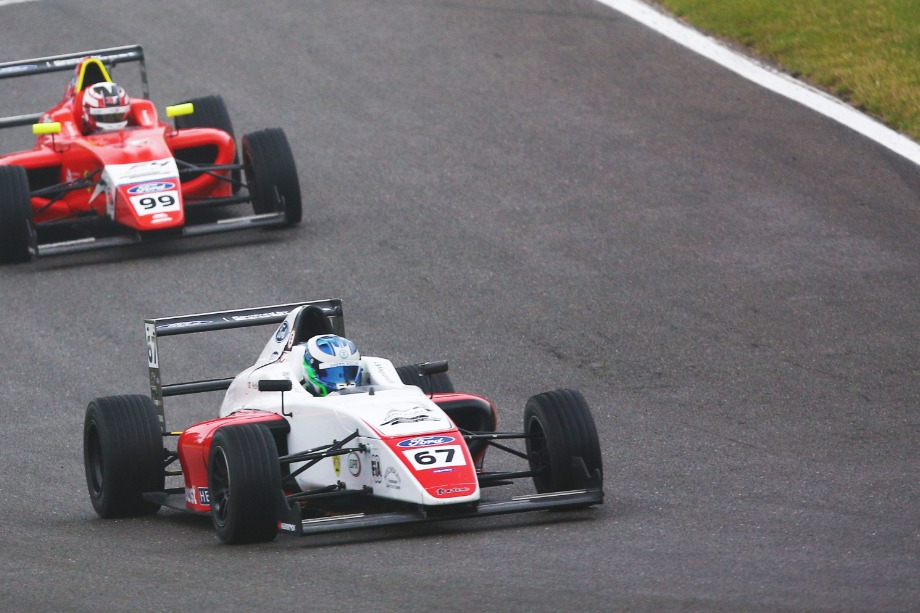 Rain began to fall just as qualifying began for the fourth round of the season, and while most of the field made the most of the early drier conditions, Hedley spent his time in the pits as his Fortec Motorsports team got his car ready to run in the wet.

After the first series of laps, Argenti’s Aiden Neate led the way with a 1m41.468s lap, with Abbi Pulling and Oliver Gray close behind.

But by this point, other drivers were starting to come into the pits for grooved tyres.

Neate had lowered the benchmark to just under 1m41s when Hedley set his first lap on grooved tyres, a 1m41.055s.

A few drivers on slick tyres were able to improve on this time, but Hedley rapidly lowered the benchmark, jumping to four seconds quicker than anyone else on his second flying lap.

Loake’s team-mate Rees was able to jump up to the top of the order with his final lap of the session, but it wouldn’t be enough to deny Hedley pole.

The Fortec driver took the chequered flag to set a 1m33.678s time, half a second quicker than Rees. His second quickest time was also enough to pip Rees to pole for the final race of the weekend.

Loake took third ahead of Eduardo Coseteng and Matias Zagazeta, who set the pace early in the session. Roman Bilinski was sixth fastest on his return from BRDC British Formula 3, ahead of Dougie Bolger and Gray. Neate and Kai Askey rounded out the top 10.

Arden’s Thomas Ikin will start on pole for the reversed grid race, having run roughly six seconds off the pace set by Hedley. His team-mate David Morales will start second.

After a strong start to qualifying, Pulling only managed to go 14th fastest, which will put her on the third row of the grid for the reversed grid race.